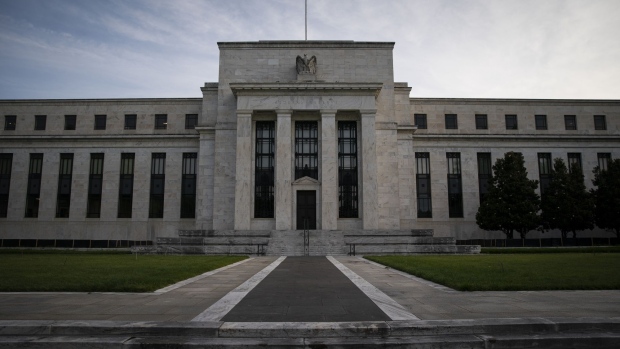 The Marriner S. Eccles Federal Reserve building in Washington, D.C., US, on Wednesday, July 6, 2022. The Federal Reserve will unveil details of what policy makers debated last month that may shed light on how they view the near-term path for interest rates amid surging inflation and signs of a slowing economy. , Bloomberg

(Bloomberg) -- More investors are pushing back expectations for when global central banks might pivot to policy easing following the current tightening cycle, even as confidence grows that inflation has peaked.

A growing number of fund managers now expect a broader policy shift in 2024 or later, according to a Bank of America Corp. survey released Friday. Roughly a third of respondents foresee that timeline, up from about a quarter last month.

At the same time, the poll of 75 investors shows managers are increasingly divided on whether government-bond rates have peaked, although a rising share say that is the case for 10-year yields. Correspondingly, Treasuries are becoming a more attractive hedging instrument for some respondents, while dollar positioning fell moderately from last month‘s 7-year high.

Markets have been whipsawed by economic data the past couple of weeks. The gap between 2- and 10-year Treasury yields touched its lowest since 1982 this week after US inflation data for July came in cooler than expected. Those figures also sent the dollar plunging and stocks soaring as traders trimmed bets that the Federal Reserve will stick to its aggressive rate-hiking path. Meanwhile, the central bank hasn’t wavered from its stance on combating high inflation.

“Despite the palpable relief in markets at a move in the right direction on inflation (at least in the US), investors are wary of how long it will take to get back towards target (and how much tightening that entails),” the survey said.

The survey was conducted from Aug. 5 through Aug. 10, polling 75 fund managers across the UK, Europe, Asia and the US with a combined $1.25 trillion under management.

Some other key findings of the survey were: