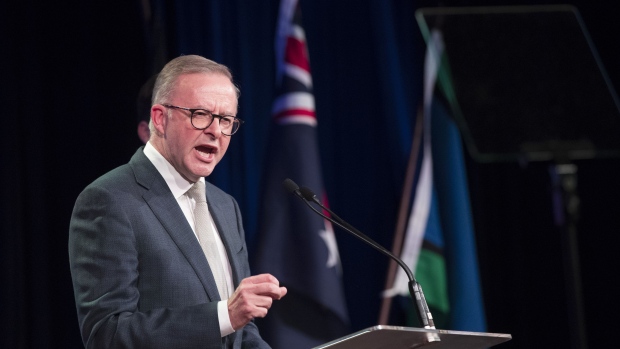 Anthony Albanese, leader of the Labor Party, speaks during the party's election night event in Sydney, Australia, on Saturday, May 21, 2022. Australia's Labor Party is set to take power for the first time since 2013, as voters booted out Prime Minister Scott Morrison's conservative government in a shift likely to bring greater action on climate change and a national body to fight corruption. , Bloomberg

(Bloomberg) -- Anthony Albanese, who is set to become the next prime minister of Australia after a close-fought election, faces major challenges going into office. From accelerating inflation to dealing with China, here’s how he might tackle these issues.

China and Other Powers

Albanese’s Labor Party pivoted to take a tougher stance toward China in the lead-up to the election. “The Chinese Communist Party has changed, it’s more forward-leaning, it’s more aggressive,” he said at a leaders’ debate on May 8. “That means that Australia of course must respond.” He has also declined to say whether he would be prepared to take a phone call from Chinese President Xi Jinping.

Still, there are less hawkish voices in his party who have called for dialogue with Australia’s largest trading partner on issues like climate change. Most immediately, Albanese heads to a meeting of the Quad — one of Australia’s main security partnerships — in Tokyo on May 24, where his commitment to work with key allies including India, Japan and the US to counter China’s influence will be watched.

Albanese is seeking improved ties with Pacific nations and Southeast Asia’s largest economy, Indonesia, as a key pillar of his foreign policy. He has said he wants to expand “people-to-people” partnerships and build engagement with Jakarta in areas like maritime safety. He has committed to visiting the country, which he says is destined to be a “superpower,” as one of the first foreign destinations after taking office.

Inflation and the Economy

Albanese seized upon the rising costs of living as a key issue in his attack on the outgoing coalition government, which he accused of being “out of touch.” While he has promised to cut taxes, build more homes and lower childcare costs, how much he will be able to remedy surging inflation, driven by external factors like the war in Ukraine, remains to be seen.

He generated buzz on the campaign when he committed to supporting an increase in Australia’s minimum wage by 5.1%, at the same pace as inflation. He later qualified his remarks, saying he will endorse such a policy only for Australians on the minimum wage.

Labor has also declined to say whether it would cut spending to rein in inflation, although the new prime minister is pledging a national budget later in the year where an audit of government expenditure is planned. They have acknowledged that their economic plans at this stage will widen the budget deficit and add A$7.4 billion ($5.2 billion) to the deficit over four years, while arguing the increased spending will improve productive capacity.

Labor promises to reduce emissions by 43% by 2030, compared to a previous target by outgoing premier Scott Morrison for a 26% to 28% cut from 2005 levels by the same date, and has committed to update Australia’s pledges to the UN to reflect that ambition. While Albanese argues that this will bring Australia back in line with nations including Canada, South Korea and Japan, it remains less ambitious than action promised by the US, European Union and the UK. He has also ruled out implementing a carbon tax.

While Albanese has promised to invest A$20 billion to improve energy infrastructure in an effort to boost the proportion of renewables in the main grid to 82%, coal remains a huge elephant in the room. The commodity accounts for more than half of the country’s electricity generation and is a key source of export revenue.

Labor’s plans include making gradual reductions to baselines set under Australia’s safeguard mechanism, which requires the largest polluters to offset emissions above a certain threshold. So far, the Labor leader has argued for a faster exit for local coal power stations compared to the previous coalition but stopped short of announcing further limits on the sector.

Albanese’s Labor Party made gains in part due to the increased support of women, in the wake of shocking revelations of misconduct, and anger about a culture that normalizes sexual violence in politics. His platform argues for creating a new commissioner to speak for victims of domestic and sexual violence, strengthening sexual and assault laws, and enshrining 10 days of paid family and domestic violence leave in law.