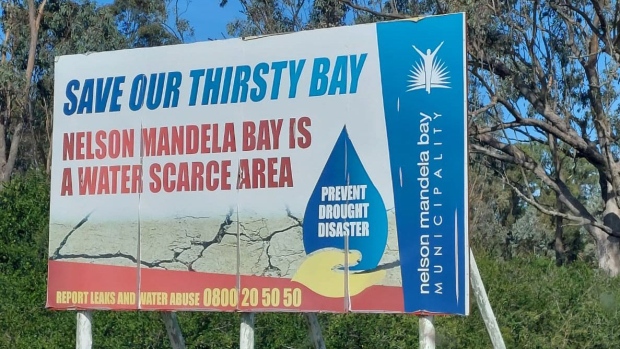 Water gushes out from a communal tap in the Greenveld informal settlement in Nelson Mandela Bay. Photographer: S'thembile Cele/Bloomberg , Bloomberg

(Bloomberg) -- Hundreds of thousands of people in one of South Africa’s most important economic regions risk having their taps run dry within weeks.

A severe drought has depleted dams in the southern Nelson Mandela Bay municipality, which includes the coastal city of Gqeberha, with three of the main reservoirs that supply about a third of its 1.3 million people close to empty. Much of the remaining water is of poor quality and the overuse of chemicals to treat it has led to the deaths of at least two children, livestock and vegetation.

The water shortages have evoked memories of Cape Town’s plight four years ago, when a drought forced the city’s more than 4 million residents to halve their daily consumption. It’s also a sign of things to come -- the government estimates demand for water will outstrip supply nationally within the next two years, and the country will face a deficit of almost 20% by the end of the decade.

“Nelson Mandela Bay currently faces an unprecedented crisis in the delivery of basic water supply,” a committee set up by local residents said in a statement. The Kouga Dam that supplies the area will likely be depleted by month-end, “which will consequently leave taps dry across Nelson Mandela Bay’s western areas. We have reached Day Zero,” it said.

South Africa and other nations on the continent are among those most vulnerable to food and water insecurity caused by extreme weather events, according to the latest report by the Intergovernmental Panel on Climate Change. The warming of the planet, caused by human emissions of greenhouse gases, is leading to more frequent and more extreme floods and droughts in the world’s poorest continent, according to the scientists.Nelson Mandela Bay was hit by severe drought in 2016 and dams have never been replenished, with levels remaining below 20% the whole of last year. The area typically gets rain throughout the year.

Gqeberha and its surrounds go through 290 megaliters (76 million gallons) of water a day, about a fifth more than the national Water and Sanitation Department says it should, with households accounting for 65% of consumption and businesses the balance. The municipality is the main economic hub in the Eastern Cape province, which accounts for about 7.7% of South Africa’s $429 billion gross domestic product.

Volkswagen AG is among several multinational companies with operations in the area. While its manufacturing plant in the industrial town of Kariega hasn’t been affected by the water shortages, it is concerned about the impact on its suppliers and employees, especially those who live in the KwaNobuhle township, which has been identified as a high-risk area. Rainwater is harvested at the plant and the water it uses is recycled, it said in an emailed response to questions.

The 9,000-hectare (22,200-acre) Coega special economic industrial zone, which lies north of Gqeberha and is one of the government’s flagship development projects, has also been hard-hit by the water shortages. Companies have resorted to using rainwater tanks, and have had to contend with reduced water pressure and flows being restricted, said Simlindele Manqina, the zone’s spokesman.

While environmental approval was granted last year for a desalination plant in Coega, construction has yet to begin.

The authorities have urged residents to use a maximum of 50 liters of water a day each.

“There needs to be a very conscious reduction in water demand,” said Sputnik Ratau, the water department’s spokesman. “We should be able to get through this period” if the municipality sticks to within its water allocation, and over the longer term more water could be made available by building new infrastructure and linking the river basins that supply the area, he said.

Politics has compounded the problem of insufficient rainfall. No party won an outright majority in Nelson Mandela Bay in the past two municipal elections and the region has been ruled by a series of unstable coalitions, with power changing hands five times in as many years. That’s led to policy uncertainty and a lack of accountability, with new administrations blaming their predecessors for the mounting water crisis.

The response has been inadequate “due to the ongoing instability issues facing the city council and the resultant impact on the municipality’s ability to deliver basic services,” said Denise Van Huyssteen, chief executive officer of the Nelson Mandela Bay Business Chamber.

In an informal settlement in Missionvale, 15 kilometers (7 miles) northeast of the Gqeberha city center, water gushes from communal taps and residents complain that leaks can go unfixed for months, with municipal workers unresponsive to their complaints.

Some poor communities already go without running water for days, or even weeks, according to Siyabulela Mama, a member of the residents’ water crisis committee.

“They queue for hours in lines at communal taps in some working-class communities,” he said. The quality of the water is also so poor that it is making people sick so they are either forced to boil it, which pushes up their electricity costs, or buy bottled water, he said.

The municipality intends drilling boreholes to augment the water supply, is fixing the reticulation system and replacing old pipes, and is working on plans to divert water sourced from the country’s biggest dam to western areas, according to Joseph Tsatsire, its acting executive director for infrastructure and engineering. While more than 30,000 leaks have been repaired since 2020, a backlog of about 4,000 remained, he said in an interview posted on the municipality’s website.

Nelson Mandela Bay Mayor Eugené Johnson declined to comment and her office didn’t immediately respond to questions on what contingency plans were in place should suburbs run dry.

Implementing rotating water cuts to reduce consumption isn’t an option, according to the water department’s Rantau.

Water shedding “has a negative impact on the ailing and aging infrastructure” and changes in the water pressure could result in pipe bursts and lead to more water losses, he said. “The situation is dire and it is worrying and is causing a great deal of concern all round.”