A tentative victory for a Federal Reserve under constant attack: Inflation bets on Wall Street are cooling from historic highs at long last.

Bond-derived expectations for price growth over the next decade are falling, the value stock boom is reversing and the industrial commodity supercycle is easing.

These are tell-tale signals that the great inflation trade of 2022 is likely peaking -- a regime shift that threatens to disrupt the cross-asset trading game while challenging naysayers including Bill Ackman.

The Fed’s policy-tightening campaign is starting to tame the red-hot business cycle as tighter financial conditions, via higher borrowing costs and lower stock prices, take a toll on consumers and businesses. At the same time the boom in goods consumption is ending with inventories at key retailers building up.

Yet ostensibly forward-looking markets haven’t done a great job in presaging price trends throughout the pandemic era. Markets have declared a peak in inflation before, only to be disappointed. Most recently US inflation in May surpassed forecasts, confounding economists and markets alike prepared for it to slow. 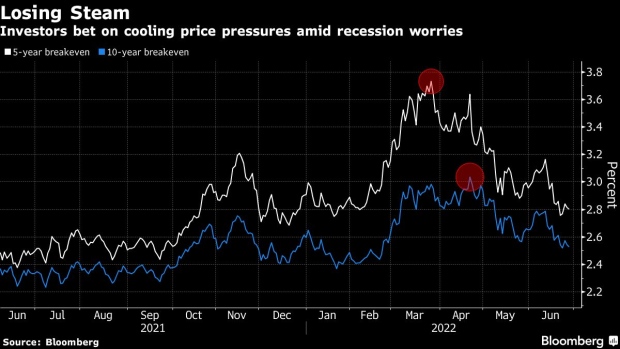 “After continually surprising to the upside over the last 12 months, and at least one previous ‘peak inflation’ event earlier in the year, could this one prove more realistic and durable?,” Emmanuel Cau, head of European equity strategy at Barclays Plc, wrote in a note to clients.

This time, what may have changed is how consumers are reacting. High prices are starting to change their behavior, discouraging them from big-ticket purchases that had boomed following the pandemic. And big retailers are facing a build-up of unwanted inventory.

All that means inflation breakeven rates on both five- and 10-year Treasuries have fallen back to levels before Russia’s invasion of Ukraine in February sent wheat and energy prices soaring. The five-year breakeven on Treasury Inflation-Protected Securities has retreated to around 2.8 per cent, implying market participants expect the average Consumer Price Index over the next five years to trend closer to the Fed inflation target of 2 per cent.

A gauge of commodities has tumbled to the lowest since March, and the US$1.9 billion Invesco DB Agriculture Fund exchange-traded fund just suffered its biggest weekly cash exodus since 2008 at US$235 million. ETF investors are fleeing the iShares TIPS product at the fastest pace since 2013 with two consecutive quarters of outflows.

Meanwhile stock managers are rediscovering their love for companies that tend to outperform in a low-rate climate like Big Tech over value equities that tend to win when price expectations rise.

“We are in a slowing economy, where longer-term inflation expectations appear to be moderating,” said Christopher Harvey, head of equity strategy at Wells Fargo, who has reversed a long-standing call on value equities. “After a good run, we shifted away from the cyclical camp about two weeks ago.” 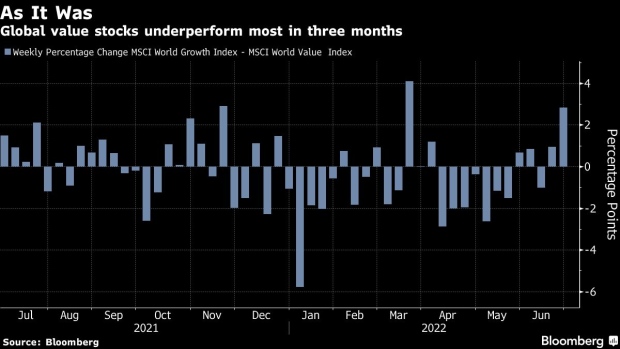 Yet there are plenty of reasons to hold onto inflation hedges. So far inflation readings in major economics continue to surpass forecasts even as other data points come in below projections, according to the Citi Surprise Index.

Indexes for goods and services remain at historic highs, while official consumer prices could edge up in the coming months even as financial measures cool.

Yet for all that, a dovish investing case has become increasingly appealing: Recession talk is getting louder just as aggregate demand slows down from historic levels.

“We started to add exposure to some sectors that have been particularly hurt by rising rates, namely biotech,” Mimi Duff, investment strategist at GenTrust, wrote in a note Monday. “Going forward, we would look to extend fixed income durations as rates stabilize further, and go overweight equities at SPX of 3300-3500 assuming we believed the inflationary pressures were likely to abate.”