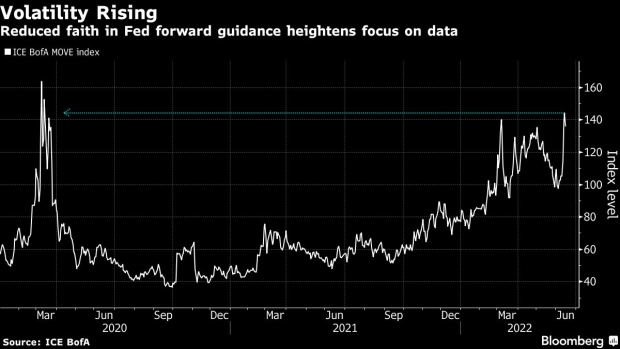 The Marriner S. Eccles Federal Reserve building in Washington, D.C., US, on Sunday, May 22, 2022. The Fed raised interest rates by 50 basis points earlier this month and the chairman indicated it was on track to make similar-sized moves at its meetings in June and July. , Bloomberg

(Bloomberg) -- The Federal Reserve proved it’s willing to rip up the playbook if the economic data warrants it. For investors, that means there will be no respite from the turbulence shaking the world’s biggest bond market.

Treasury prices swung wildly over the past week as the central bank raised its benchmark interest rate by three quarters of a percentage point, a move that just weeks earlier Powell had said wasn’t under consideration. It was the Fed’s biggest rate hike since 1994 and followed a June 10 report showing that consumer prices unexpectedly rose at a fresh four-decade high.

The Fed’s shift in the face of the new evidence underscored a discomfiting reality for traders: The deep uncertainty of the post-Covid economy means they can’t rely on the Fed’s guidance as much as they did during the past two decades, when inflation remained relatively tame and the central bank only tightened monetary policy at a measured pace.

With the trajectory now far less predictable, they’re left at the mercy of the next reports on inflation, the job market and the economy, all of which have the potential to trigger fresh about-faces in the Treasury market. As a result, gauges of future volatility are hovering near the highest since the havoc sown by the eruption of the pandemic in 2020 and liquidity has been strained, exacerbating market moves.

“We are not near the end of a volatile regime for markets,” said Gargi Chaudhuri, head of iShares investment strategy for the Americas at BlackRock Inc. “The Fed has pivoted so many times around their guidance and rates -- and unfortunately that does create unnecessary volatility.”

As Fed officials emerge from their pre-meeting quiet period, individual policy makers will be out pushing their views, potentially providing fresh insight on the interest-rate outlook. Powell will also face two days of Congressional testimony in the upcoming week.

In remarks at a conference Friday, Powell said the bank’s fight to restore price stability was “unconditional,” with he and his colleagues “acutely focused on returning inflation to our 2% objective.”

Here’s a highlight of some of what traders have on their radar ahead of the Federal Open Market Committee’s next meeting on July 27:

The Fed’s interest-rate hikes since March have already driven yields on some Treasuries to the highest since 2007, caused credit spreads to widen and sent US stocks into bear-market territory, all tightening financial conditions as the Fed intends. Yet just when they have tightened enough to rein in inflation -- and if that will spark a recession -- is an open question.

Bond Traders Are Declaring the Death of Forward Guidance

Two-year Treasury yields, which were around 0.25% a year ago, surged as high as 3.45% on June 14, only to settle back down at around 3.2% after Powell on Wednesday said that 75-basis-point moves won’t be the norm. Ten-year notes hit nearly 3.5% before ending the week around 3.2%.

“We are seeing three and four standard deviation moves in the two-year yield,” Chaudhuri said. “The lack of stability in the front-end” reflects the “Fed being in a position of seeking weaker growth in order to achieve consistent signs of inflation moving lower.”

Economists are mixed on what the Fed does at it next gathering in July, while swaps traders are pricing in high odds odds of another 75-basis-point hike. The Fed’s target-rate range is presently 1.5% to 1.75%.

“For investors, it likely signals volatility,” said Paul Donovan, chief economist at UBS Global Wealth Management. “The danger here is that adding volatility into financial markets has unnecessary implications for the real economy. And as ever, your credibility – with forward guidance” once cracked “is almost impossible to repair in the short term.”