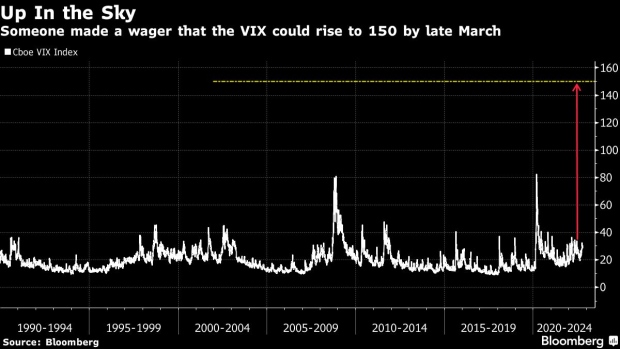 (Bloomberg) -- Uncertainty about the upcoming jobs report pushed the Cboe Volatility Index, or VIX, to close above 30 on Thursday. And someone is wagering that it won’t stop there.

Shortly before the market closed, a trader bet that the VIX could increase to 150 by late March. Through a series of block trades, the trader -- most likely one person, according to market participants -- bought 50,000 call options, paying $950,000. It was the most-active VIX options contract Thursday.

“It may be seen as a cheap way to hedge if we see another significant crash,” said Michael Beth, director of trading at WallachBeth Capital. “While the contract has low delta now, if things move quickly, we can see the value of the contract significantly increase.”

This kind of massive activity in contracts that are so far from being profitable is rare. In such an uncertain environment, traders tend to stick to short-dated options that aren’t too far from being in-the-money. The highest the VIX has ever traded on an intraday basis was 89.53 on Oct. 24, 2008, according to Bloomberg data going back to 1990.

Between now and March 22 when the contracts expire, investors face a slew of potentially market-moving events, like four interest-rate announcements and six inflation prints. The buyer of the contracts could be in a situation where he needs to have a hedge that can serve as protection in a panic scenario, should one occur, according to Chris Murphy, co-head of derivatives strategy at Susquehanna International Group.

“This tail hedge doesn’t need the VIX to actually get close to 150,” Murphy said. “But if VIX and VVIX both spike, the value of these calls could grow five-10 fold just due to the Vega.”