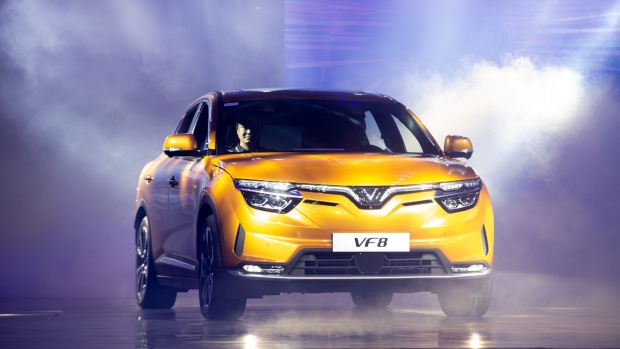 Considering VinFast hadn’t made a car before 2017, it’s moving at light speed. Its factory in Haiphong, to Hanoi’s north, spans 9 million square feet. Another one costing $4 billion in phases is planned for North Carolina. Its goal is to make and sell around 1 million electric cars within five to six years, an extraordinary target considering the company produced about 35,000 last year.

VinFast isn’t just targeting domestic customers, either. It plans to sell EVs to customers in the US, Canada and Europe, going up against legacy automakers led by Toyota, Volkswagen and General Motors, as well as Tesla and the raft of aggressive Chinese upstarts such as Nio and Xpeng.

It’s a tall order for a company barely known outside Vietnam. But as the 180 or so assembled media, influencers, customers and business partners were often reminded last week, seeing is believing.

This much was clear from the immersive Vingroup experience: Founder and Chairman Pham Nhat Vuong, who didn’t make an appearance, has very deep pockets. The factory visit, which stretched for the better part of a morning and included an elaborate champagne and lobster lunch, was eye-opening. From the body shop to the press shop, to the battery pack facility and general assembly line, the cavernous complex was stocked with state-of-the-art German machines and gleaming robots. VinFast also makes its own chips and is starting to make its own EV batteries “just next door,” attendees were told.

Very little equipment was operating during the visit, however, and most places were devoid of workers, except a handful who looked as interested in the gawping guests being ferried around in golf carts as visitors were in them.

A spokesman said after the tour that VinFast had stopped making gasoline vehicles and only has one model in production for the time being, with a second on the way. Output is only running in range of tens of thousands, so lines are operating in moderation for the moment. The factory has been designed to eventually reach 250,000 units annually and will operate at high capacity when the VF 8 and VF 9 vehicles are ready to be sold in Vietnam and international markets.

The factory tours were strange for other reasons. As several seasoned trade journalists pointed out, it’s exceedingly rare for a collection of YouTubers, TikTokers and reporters to be given this level of access to something as proprietary as a cutting-edge car assembly plant. Once the golf carts stopped, guests were free to mill about, take pictures and wander around, passing under heavy-duty overhead conveyors and, at one stage, brushing off sparks flying out of a welding area.

There was always a ready reason for where everyone else was. Press shop workers were at lunch, despite it being 10 in the morning (that was also the case in July, when another batch of reporters were taken on a similar tour). General assembly line employees hadn’t started their shift yet. The machines were running slow or not at all so influencers could take video more easily.

The oddities only compounded as the days progressed. Guests were driven around in a convoy of buses to tour some of Vingroup’s sprawling real estate empire on the outskirts of Hanoi. Vinhomes Ocean Park 1 was all rice paddies three years ago. Now, there are man-made lakes, running tracks, high-rise condos, a shopping center and row upon row of French-influenced villas.

Outside the residential towers, though, the area is largely deserted. Weeds have taken over the gated front yards of the villas, windows are boarded up and the buildings have started to crumble. A spokesman said the company sold out all the houses that are part of the project, and that some customers are completing interiors of their properties. Others haven’t been able to complete construction because of the pandemic and have postponed their move-in.

Vinhomes Ocean Park 2, which will be even bigger, is already under construction a few kilometers down the road. There, a huge waterpark and wave pool has been built first, surrounded by cranes and dust. Lifeguards stood on duty even though not a single visitor was present. The park was very popular with Hanoi residents, attendees were told, just not on a weekday.

At VinUniversity, the library was devoid of books (most are electronic, visitors were told) and the campus was nearly devoid of students. Some were on autumn break, and others had compulsory military obligations, according to the company. Two young people introduced as students — one from Ukraine and another from New Zealand — were vague about what they were studying and didn’t have a convincing answer for why they’d come to a university that didn’t exist a few years ago. Both said separately their mothers had made the decision for them. A Vingroup ambulance also cruised by at convenient moments, offering tour guides a neat segue to talk about the company’s hospital business and VinUniversity’s medical degree.

Before tour participants departed — via chartered jets, Emirates business class or first class for those traveling onward from San Francisco — there was an opportunity while staying at the coastal Vinpearl Nha Trang resort to test-drive one of the company’s EVs. The VF 8, which starts from $42,000 with monthly battery subscription or $57,000 with battery included, is a good-looking SUV. It handles magnificently, is whisper quiet and boasts an impressive array of bells and whistles, including a touch-screen console, voice-activated features and stylish leather interior. The Netherlands embassy in Vietnam bought one in orange.

VinFast’s aggressive direct marketing approach may well work. Social media posts by folks flown in from Europe and the US will sway some consumers, and executives working on the VF 8 said US President Joe Biden’s tweet about the planned factory in North Carolina did wonders for the company’s profile in North America.

But whether VinFast can fulfil the 65,000 pre-orders it says it has globally — some of those buyers got the same tour to Vietnam, thrown in for free — and go on to sell 750,000 EVs annually by 2026 is unclear. It took Tesla 18 years to cross that threshold for the first time.

The notion that Vuong — Vietnam’s richest person, with a net worth of $5 billion — will easily manage to sidestep the production hell Elon Musk has referred to seems unlikely. Last week’s tightly choreographed tour was impressive, but more will need to be seen before believing what would be some astonishing feats.