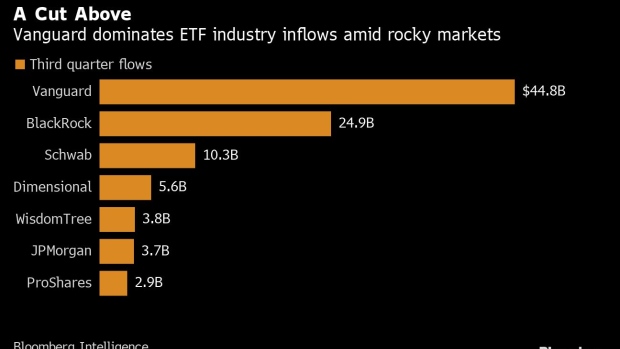 Nearly $45 billion flowed into Vanguard ETFs in the third quarter, the most of any company’s lineup and billions of dollars ahead of BlackRock Inc.’s $25 billion haul, Bloomberg Intelligence data show. That brings the Jack Bogle-founded firm’s total ETF assets to $1.76 trillion across its 82 funds, versus an industry-leading $2 trillion for BlackRock.

It’s the continuation of a trend that’s nearly two decades in the making. While Larry Fink’s BlackRock has held the title of world’s largest ETF issuer since 2003, monetary policy-driven volatility across financial markets has helped Vanguard narrow the gap dramatically over the past several years. That’s because Vanguard’s core audience is financial advisers and individual investors, who tend to methodically funnel cash into the Malvern, Pennsylvania-based firm’s dirt-cheap funds, while BlackRock’s institutional base isn’t as consistent amid market upheaval, according to Nate Geraci of the ETF Store.

“Vanguard has historically thrived in times of market turmoil because their investor base is preconditioned to simply hold their nose and keep buying,” said Geraci, president of the advisory firm. “Given the trajectory of flows over the past several years, it’s only a matter of time before Vanguard eclipses BlackRock in ETF assets.”

BlackRock didn’t immediately respond to a request for comment.

Nearly every asset class has convulsed this year as global central banks attempt to stamp out the hottest inflation readings in decades. The S&P 500 and Treasuries have plunged in unison amid a series of historically aggressive Federal Reserve rate hikes, with policy makers signaling more are on the way.

That dynamic has shredded returns, but it’s done little to slow a stampede of money into Vanguard’s ultra low-fee funds. The $248 billion Vanguard S&P 500 ETF (ticker VOO) has absorbed more than $36 billion in 2022, the most of any other ETF and on track for the fund’s second-biggest annual inflow ever.

Meanwhile, New York City-based BlackRock has seen its share of US ETF assets shrink to 34% currently from 40% in 2018. Over the same period Vanguard grew its portion to roughly 30% from 25% and is on track for 21 years of straight growth, Bloomberg Intelligence data show.

That’s not to say it’s been entirely smooth sailing amid the bear market. Last week, Vanguard announced that it would shutter the Vanguard U.S. Liquidity Factor ETF (VFLQ) in late November -- the firm’s first liquidation of a US ETF since the $245 billion Vanguard Total Stock Market ETF (VTI) launched in 2001.

Still, the direction of investor progress is clear. Bloomberg Intelligence expects Vanguard to take the crown of largest ETF issuer in 2025.

“They inhale market share in rough markets,” said Bloomberg Intelligence senior ETF analyst Eric Balchunas. “By the end of this decade -- or even sooner if the market remains difficult -- Vanguard will be the asset leader in basically every category and vehicle type.”