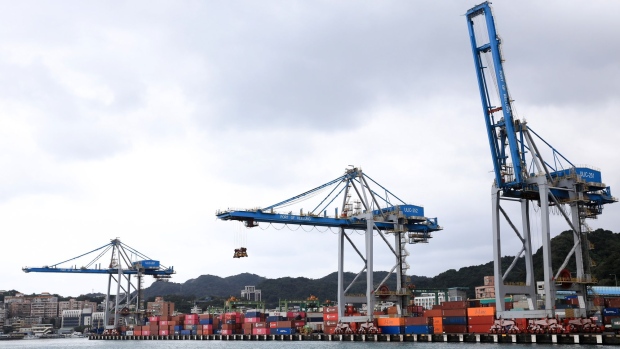 Gantry cranes at the Port of Keelung in Keelung, Taiwan, on Friday, Jan. 7, 2022. Taiwan exports extended their double-digit growth for a tenth month, with shipments from the island in 2021 smashing all records due to soaring demand for technology products and components. , Bloomberg

(Bloomberg) -- Senior US and Taiwanese officials held inaugural talks about developing an “ambitious roadmap for negotiations” to deepen economic and trade ties, a move likely to exacerbate tensions between Washington and Beijing.

Deputy United States Trade Representative Sarah Bianchi and Taiwan Minister-Without-Portfolio John Deng are laying the groundwork to advance “mutual trade priorities” through potential agreements in areas such as regulatory practices, agriculture, anti-corruption and non-market policies and practices, the Office of the USTR said in an emailed statement Monday.

The meeting between Bianchi and Deng was the first under the Biden administration’s so-called US-Taiwan Initiative on 21st Century Trade. The effort follows the announcement in May of its Indo-Pacific Economic Framework, a broader initiative designed to counter China’s influence in the region but one that didn’t include Taiwan.

US interactions with Taiwan are all unofficial and take place through the American Institute for Taiwan and the Taipei Economic and Cultural Representative Office in the US.

Bianchi and Deng also held roundtable conversations with several groups of US and Taiwan stakeholders, and plan additional conversations in the near future, the USTR said.