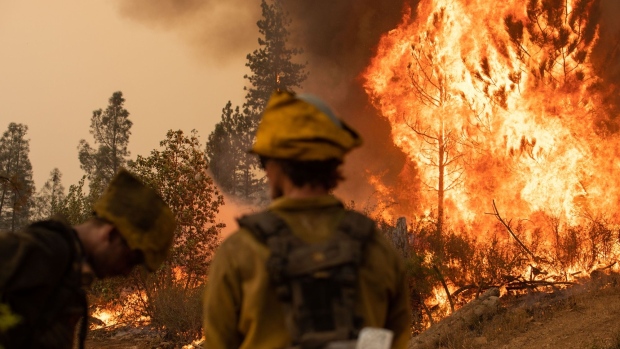 Firefighters watch a backfire operation during the Mosquito fire near Volcanoville, California, US, on Friday, Sept. 9, 2022. The wildfire, which started Tuesday evening north of the Oxbow Reservoir, had burned nearly 34,000 acres by Saturday morning and remains 0% contained, making it one of the state’s largest wildfires of the season so far, reported the San Francisco Chronicle. , Bloomberg

On Sept. 24, the US Forest Service removed one of the utility’s transmission poles from the site in Placer County where the Mosquito fire started, PG&E said Monday in a filing. A USFS spokesman said the agency doesn’t comment on active investigations.

The investigation marks a significant setback for efforts by PG&E to move past its troubled history with fires. The company was charged with manslaughter for a 2020 blaze and pled guilty to 84 counts of involuntary manslaughter for its role in a deadly 2018 fire that drove it into bankruptcy. The latest investigation could also have significant financial and regulatory implications for the company.

If PG&E is found criminally liable for the blaze, it may make it harder for the company to recover those costs from customers. In addition, state regulators could increase their oversight of the utility under an agreement struck as a condition of PG&E emerging from bankruptcy in 2020.

Shahriar Pourreza, a Guggenheim Securities analyst, downplayed the likelihood of serious financial repercussions for PG&E stemming from the blaze.

“While it is one of the biggest fires of 2022, the damage estimates remain below insurance thresholds,” analysts led by Pourreza wrote in a research note Monday.

PG&E shares were up 1.6% at 2:23 p.m. in New York after earlier rising 5.1%, the most intraday in three months. PG&E was readmitted to the S&P 500 Index on Friday following its removal in 2019 ahead of its bankruptcy filing.

The Mosquito fire has charred almost 77,000 acres and destroyed 78 structures since it began in the drought-parched Sierra Nevada foothills east of Sacramento. As of Monday, the fire was 85% contained.

PG&E, the state’s largest utility, said it’s cooperating with the investigation and is conducting its own probe into the cause of the fire, according to a statement. Officials have not yet determined what sparked the blaze.

The company had already notified regulators of a power-line failure around the time the fire reportedly started on Sept. 6. PG&E is also facing a lawsuit filed last week over the fire.

(Updates with USFS response in second paragraph. An earlier version corrected the name of the agency that initiated the probe.)