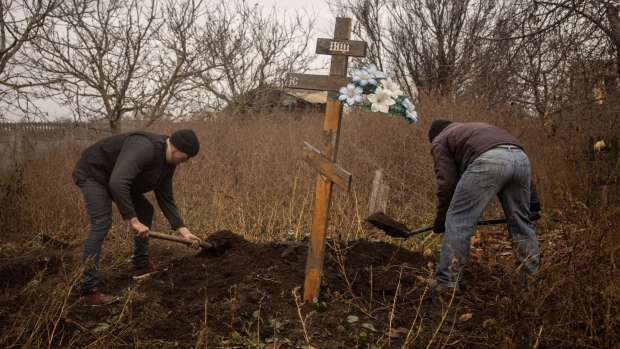 KHERSON, UKRAINE - NOVEMBER 28: Local residents help police, forensic experts and war crimes prosecution teams to exhume a burial site containing the bodies of six civilians that were executed by Russian forces in the yard of a house in the town of Pravdyne on the outskirts of Kherson on November 28, 2022 in Kherson, Ukraine. Eight people were killed at the house when an informant told Russian forces the civilians were passing on information to Ukrainian military sources. The bodies were found with their hands tied, blindfolded and shot at close range in the back of the head. Afterwards the house was blown up and the bodies were later buried in a grave next to the house by local residents. (Photo by Chris McGrath/Getty Images) , Photographer: Chris McGrath/Getty Images

(Bloomberg) -- Russia’s invasion of Ukraine has elevated US concerns that Vladimir Putin’s government could use biological weapons, according to a top US State Department official who’s in Geneva for a review of the global treaty addressing such threats.

“We’ve always been concerned about their own biological program,” Under Secretary for Arms Control and International Security Bonnie Jenkins said, speaking from the US Mission in Geneva. But those concerns have increased as Russia has continued to make unsupported allegations about US development of biological weapons in Ukraine. Such disinformation could mask Russia’s own weaponization of infectious diseases, she said.

“As long as they continue the unprovoked invasion of Ukraine -- staying there and doing what they’re doing and making these allegations -- there’s always a possibility that they’ve been using” disinformation as a cover, she said.

The veteran diplomat spoke in an interview paces away from the European headquarters of the United Nations, where health and security experts have gathered for a three-week conference to review the Biological Weapons Convention, a Cold War-era treaty that was the first to ban a class of weapons of mass destruction.

In April, the State Department said in a report that the US assessed that Russia maintains an offensive biological weapons program in violation of the disarmament treaty. The report highlighted prior breaches, while indicating that the intelligence behind the current determination remains classified.

So far, Russia’s disinformation campaign has dominated the international forum that’s intended to strengthen the Biological Weapons Convention. Russia has used the platform to double down on its unsupported claims of biological weapons labs in Ukraine, while also maintaining that its invasion was irrelevant to the forum. Those comments have drawn a backlash from the US, Ukraine and their allies.

On Wednesday, after public spats earlier in the week, Leonardo Bencini, an Italian diplomat and president of the review conference, pulled the Russian delegation to the side of the room for a private sidebar. The Russians shook their heads repeatedly in dissent, and the conversation continued until the president broke away and invited nongovernmental organizations to give statements, which predominately focused on advances in science and technology.

Later, Russia rehashed its allegations, and the US responded it wouldn’t engage further on the claims.

Jenkins said the US delegation doesn’t want Russia’s disinformation campaign to distract from good-faith efforts to strengthen the Biological Weapons Convention. At the end of three weeks, countries much reach consensus on future disarmament priorities.

“Russia can very easily be a spoiler,” Jenkins said. Another review conference won’t be held for five years, and the Russian disinformation could stymie the rare opportunity for progress, she said.

One of the conference’s goals is to bring the treaty “into the 21st century,” she said, and “Covid woke people up” to the dangers of biological threats.