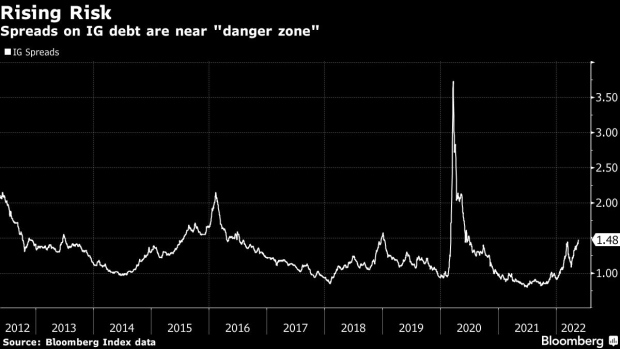 The Marriner S. Eccles Federal Reserve building stands behind a fence in Washington, D.C., U.S., on Tuesday, Aug. 18, 2020. In addition to helping rescue the U.S. economy amid the coronavirus pandemic, Fed Chair Jerome Powell and colleagues also spent 2020 finishing up the central bank’s first-ever review of how it pursues the goals of maximum employment and price stability set for it by Congress. Photographer: Erin Scott/Bloomberg , Bloomberg

(Bloomberg) -- Investors who are fretting that the Federal Reserve’s campaign to tame inflation is putting pressure on stocks might want to take a closer look at corporate bonds.

Money managers will be watching risk premiums across US credit markets next week as levels inch closer to what strategists have pointed to as a warning sign of stress.

Spread levels above 150 basis points is where many market participants say the Fed may start to worry that its quantitative tightening plan is putting too much strain on corporate-debt markets, Bloomberg News previously reported. Risk premiums, for the most part, have remained below that mark for much of the last decade, except during periods of market stress such as the pandemic and the 2016 oil crash.

“We’re in kind of the approach to the danger zone, 150 basis points of spread. If you break to 200, that’s when the Fed has to take a little bit of a pause and say, ‘Are capital markets still functioning?’” Winifred Cisar, global head of credit strategy at CreditSights Inc., told Bloomberg Television on Tuesday.

A similar warning sign, meanwhile, is flashing in the junk-debt market as spreads on the riskiest tier of bonds move dangerously close to 1,000 basis points -- what would be considered a distressed level.

Investors will also parse through a fresh batch of minutes from the most recent Fed rate-setting meeting, which may help give markets insight into the US central bank’s tightening path.

Macy’s Inc., Gap Inc. and Costco Wholesale Corp. are among bond-issuers that are scheduled to report earnings next week. Retail companies will be in focus after weak outlooks from Target Corp. and Walmart Inc. sent stock and bond prices tumbling.

US high-grade bond syndicate desks “will look to next week for some stability in the financial markets,” Bloomberg strategist Michael Gambale wrote. Debt sales stalled at the end of the week amid broader market volatility and risk-off sentiment. Companies that stood down on expected deals will likely look again over the next few days, he said, should the issuance backdrop improve.

Leverage finance markets, meanwhile, are sitting at a virtual standstill. Only two junk bonds have priced in May in the US high-yield bond market. There are no deals currently in the pipeline.

Commitments are due on two leveraged-loan deals, while a handful of other potential sales are past due, including Mallinckrodt’s $900 million term loan that will in part help fund its exit from bankruptcy.