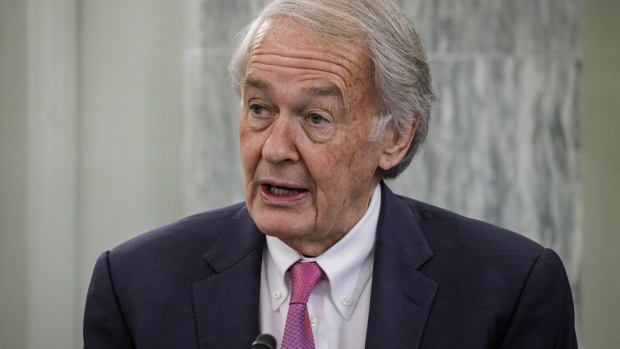 (Bloomberg) -- A US congressional delegation led by Senator Ed Markey landed in Taiwan Sunday for a two-day visit, testing whether China will react more forcefully than in the past to trips by lower-ranking American lawmakers after House Speaker Nancy Pelosi went earlier this month.

The delegation will meet Taiwanese President Tsai Ing-wen, Minister of Foreign Affairs Joseph Wu and local lawmakers, according to a Foreign Ministry statement.

They will discuss bilateral relations, regional security, trade and investment, global supply chains, climate change, and other significant issues of mutual interest, according to the American Institute in Taiwan, the de-facto US embassy.

Along with Markey, a Massachusetts Democrat, the delegation includes House Representatives John Garamendi and Alan Lowenthal, both of California, and Don Beyer of Virginia, all Democrats, along with Aumua Amata Coleman Radewagen of American Samoa, a Republican.

The delegation will reaffirm US support for Taiwan and “encourage stability and peace across the Taiwan Strait,” Markey’s office said in a statement. Meetings are planned with political and business leaders to discuss topics including investments in semiconductors, according to the statement.

Reuters cited China’s embassy in Washington as saying on Sunday that the latest congressional visit “proves that the U.S. does not want to see stability across the Taiwan Straits and has spared no effort to stir up confrontation between the two sides and interfere in China’s internal affairs.”

Pelosi’s stopover in Taiwan drew a strong response from China, which conducted its most provocative military drills in decades in the wake of her visit. Beijing denounced the trip as a violation of the US pledge decades ago not to formally recognize the government of Taiwan, which China claims as its territory.

While she was the highest ranking US official to make it Taiwan in a quarter century, visits by other members of Congress are common. During her meeting with the Taiwanese leader, Pelosi recalled that several US senators, including the chair of the Foreign Relations Committee, Democrat Bob Menendez, had visited this year without drawing a firestorm of criticism from Beijing.