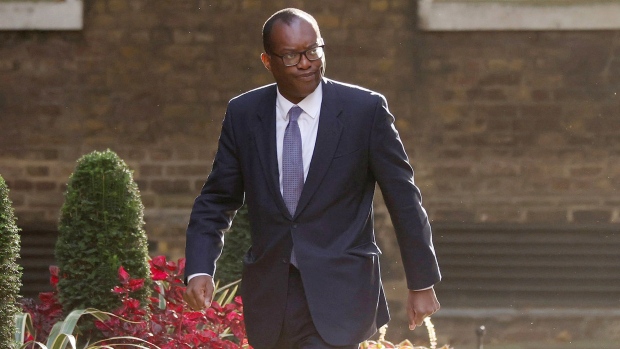 Kwasi Kwarteng privately pleaded with his angry colleagues in the UK’s ruling Conservative Party to support the government’s economic policies after they triggered days of financial market turmoil, warning that any division would play into the hands of the poll-leading opposition Labour Party.

Groups of Tory MPs have spent two days in frantic discussions following a dramatic £65 billion ($71.9 billion) intervention from the Bank of England to avert a meltdown in the bond market. Some MPs have privately called on Kwarteng to quit less than a month into the job to give new Prime Minister Liz Truss political cover to reverse plans for unfunded tax cuts that have roiled investors.

But both dug in during media appearances Thursday, which largely failed to quell market nerves. And in a WhatsApp message sent to Tory MPs calling themselves the Treasury Support Group, Kwarteng thanked colleagues for their “input” and said he understood their concerns.

“We will show markets our plan is sound, credible and will work to drive growth,” Kwarteng wrote in the message seen by Bloomberg. “We need your support to do this as the only people who win if we divide is the Labour Party.”

Kwarteng’s message came before a YouGov poll showed Labour has surged to a 33-point lead over the Tories, which it described as the largest lead enjoyed by any party with any polling company since the late 1990s.

“I am always available for a meeting,” he said, urging MPs not to publicly criticize the plans. “I hope we can engage dynamically in the coming weeks.”

The fallout in the markets and among the British public represents a political crisis for both the chancellor and the prime minister, because it undermines the Tories’ typical claim to be the party of sound economic management.

The problem is compounded because the majority of Tory MPs did not want Truss to be premier, amid warnings during the leadership campaign over the summer that her plans would crash the pound.

Tory MPs are now being asked to defend tax cuts that disproportionately favor the UK’s biggest earners during a cost-of-living crisis.

On Thursday, Truss and Kwarteng used media appearances to try to reassure markets -- and voters -- that their plan would ultimately succeed by removing barriers to growth. The premier said she attributes the turmoil to global pressures including Russia’s war in Ukraine, and not her economic plan itself.

Other ministers have echoed that statement. Speaking to Bloomberg Television during her first overseas trip as international trade secretary, Kemi Badenoch downplayed the market volatility, while acknowledging the government had to communicate “what we’re doing and why.”

“We’ve seen markets be volatile before,” she said. “Sometimes these things can become a vicious circle where people panic unnecessarily when there’s change or when there’s something unexpected.”

She also defended Kwarteng, who she said was “working well” with the Bank of England, despite the central bank having to intervene dramatically on Wednesday to prevent a meltdown in the gilt market.

Meanwhile Truss’s earlier comments -- her first for days in public -- did little to calm Tory nerves. Government bonds and the pound fell as she spoke -- though the currency later rebounded and bonds pared losses.

That unrepentant approach further angered some of her party, prompting Kwarteng’s WhatsApp message. But echoing Truss during her broadcast round, the chancellor focused on the government’s energy support package -- which is popular in the party -- but not the unfunded tax cuts, which are not.

Mel Stride, the influential Tory chairman of the Treasury Select Committee, said the government had been wrong not to deliver its economic plans alongside a costing from the UK’s fiscal watchdog. He urged Kwarteng to bring forward a statement on the medium-term fiscal plan from Nov. 23 to the end of October.

“Your growth plan is amongst the largest fiscal interventions of modern times and one that has resulted in various significant and concerning reactions in the markets,” Stride said in a letter to Kwarteng Thursday. “It is hard to conclude other than that an absence of a forecast has in some part driven the lack of confidence in the markets.”

The level of Tory anguish suggests that Truss’s turbulent start to her time in office is likely to continue into the Conservative Party’s annual conference that begins Sunday, ratcheting up the stakes for her leader’s speech Wednesday. Some party heavyweights have made clear their opposition to her administration’s plans and are likely to stay away from the conference.