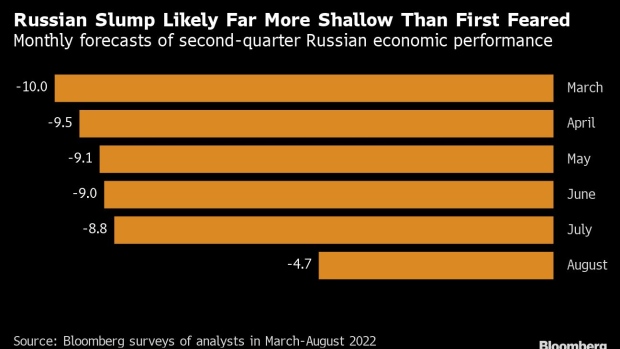 Oksana Markarova speaks during an interview in Washington, D.C., on Aug. 11. , Bloomberg

(Bloomberg) -- Russia defied growing international pressure to grant inspectors immediate access to Europe’s largest nuclear plant in occupied Ukraine amid fears of a catastrophe, saying a visit can’t take place before the end of the month.

Meanwhile, President Vladimir Putin’s invasion set Russia’s economy back four years in the first full quarter after the attack, with gross domestic product expected to have plunged an annual 4.7% -- one of the steepest downturns on record. Quarterly figures will be released later Friday.

A senior US military official, speaking to reporters on condition of anonymity, said the U.S. still doesn’t know what weapons were used in an attack Tuesday on a Russian airbase in Crimea. The official said surveillance aircraft and munitions were destroyed in the attack on the Saky base.

(See RSAN on the Bloomberg Terminal for the Russian Sanctions Dashboard.)

The northern city of Kharkiv and the towns of Nikopol and Marganets in the Dnipropetrovsk region were shelled overnight, according to local authorities. Russian forces were partially successful in the offensive in the direction of Horlivka-Zaitseve, the Ukrainian general staff reported. The Ukrainian military says Russian forces launched an unsuccessful attack in the districts of Spartak and Maryinka in the Donetsk region. Fighting continues near the village of Pisky in Luhansk.

US Official Says No Immediate Threat to Zaporizhzhia Plant (7:28 p.m.)

The senior US military official who spoke Friday said there is no immediate threat to a nuclear plant in Russian-occupied Zaporizhzhia but that could change at any moment.

Russia continues to engage in indiscriminate artillery fire in Ukraine, the official said. Earlier, the Russian envoy to international organizations in Vienna, Mikhail Ulyanov, said a mission to the nuclear plant led by International Atomic Energy Agency chief Rafael Grossi can’t take place before the “end of August or early September,” according to an interview with the Izvestia newspaper.

The IAEA, the United Nations’ nuclear watchdog, has warned of a “real” risk of nuclear disaster at Zaporizhzhia because of repeated strikes near the facility in recent days. Russian invasion forces took over the power station in March, though it continues to be operated by Ukrainian workers. Each side in the war accuses the other of targeting it.

The supply of Russian oil to the Czech Republic via the Druzhba pipeline will resume on Friday around 8 p.m. local time, according to an emailed statement from Slovak pipeline company Transpetrol.

Russian crude flows through Ukraine to Hungary, Slovakia and the Czech Republic were halted because sanctions prevented payment of a transit fee. Supplies for Hungary and Slovakia restarted two days ago.

The Czech Republic will put a proposal for a broad ban on visas issued to Russian citizens at an EU foreign ministers meeting later this month.

Czech Foreign Minister Jan Lipavsky said his government will seek consensus on the measure, which so far has gained little traction outside of the EU’s Baltic members, at a meeting of the bloc’s foreign ministers later this month. German Chancellor Olaf Scholz signaled Thursday he wouldn’t support it.

One of President Vladimir Putin’s top Kremlin aides is leading negotiations to decide the fate of Russia’s most popular search engine, whose founder was sanctioned over Yandex NV’s portrayal of the war in Ukraine, according to three people familiar with the talks.

Sergei Kiriyenko, the first deputy head of Putin’s administration, is heading the talks over the public company as Yandex’s founder, Arkady Volozh, has been sidelined due to European Union sanctions, according to the people, who asked not to be identified because the plans are private.

The Liberian-flagged Brave Commander is expected to arrive at Ukraine’s Pivdennyi port on the Black Sea to load about 23,000 tonnes of grain for Ethiopia.

It’s the first vessel chartered so far under the framework of the UN’s World Food Program since grain exports restarted under a safe-transit agreement signed last month.

Almost all Ukrainians believe the nation will will the war against Russia, and 72% would back joining NATO if a referendum were held today, according to a joint survey of the Washington-based International Republican Institute and the Ukrainian “Rating” group.

A sizable majority, 64%, said Ukraine would maintain all territories from its internationally recognized borders in 1991 after the current war. Another 14% say that Ukraine would regain territory under its control prior to Russia’s Feb. 24 invasion.

Approval of President Volodymyr Zelenskiy’s job performance was running at 91%, up 13 points from May. The poll was taken June 27-28 and excluded the Crimea, Donetsk and Luhansk regions.

Russia’s economic slump following its invasion of Ukraine seems more shallow than initially indicated, but President Vladimir Putin’s war has still put the nation on track for one of the longest downturns on record.

Forecasts due Friday will likely show Russia’s GDP shrank for the first time in a year, hit by international sanctions that disrupted trade and threw industries like car manufacturing into paralysis.

Ukraine’s envoy to Washington cautioned the US and allies against fatigue over a war that’s costing billions of dollars in security assistance, saying it would be far costlier in the end to let Putin go unchallenged.

“Can you simply say, ‘OK, let’s forget about Ukraine and do something else’? The answer is no,” Ambassador Oksana Markarova said in an interview Thursday in Bloomberg’s Washington office.

Markarova also called for the US to sanction all Russian private banks.

Ukraine’s President Zelenskiy said there’s a “global interest, not just a Ukrainian need,” to pressure Russia to give up control of the captured Zaporizhzhia nuclear power plant, Europe’s largest.

“Russia has once again gone through another floor in the world history of terrorism,” Zelenskiy said Thursday in his nightly video address to the nation. “No one else has used a nuclear plant so obviously to threaten the whole world.”

“Only the complete withdrawal of Russians from the territory of the Zaporizhzhia NPP and the restoration of Ukraine’s full control over the situation around the plant will guarantee the restoration of nuclear safety for all of Europe,” Zelenskiy said.