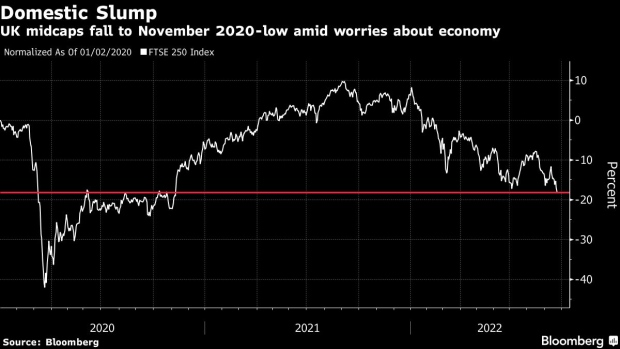 Several UK equity sectors got a brief boost Friday as Chancellor of the Exchequer Kwasi Kwarteng announced sweeping tax cuts, though an index tracking domestic shares later slumped to a near two-year low.

Housebuilders Persimmon Plc and Taylor Wimpey Plc jumped as much as 4% as Kwarteng outlined changes to the thresholds for stamp duty -- a property transaction tax -- that’s expected to boost property demand. Marks & Spencer Group Plc, meanwhile, was among retailers gaining on news that a planned increases in the duty on booze will be cancelled. Broader tax cuts for corporations and individuals were also announced, as well as VAT-free shopping for overseas visitors.

However, most of the gains quickly petered out amid a decline for broader markets. The UK FTSE 250 index -- which is dependent on Britain’s economy -- slid 1.4% by 11 a.m. in London to hit the lowest level since November 2020.

Guy Foster, Brewin Dolphin Ltd.’s chief strategist, said the fiscal boost will need to be countered by higher interest rates at the Bank of England. A further slump in the pound Friday is also likely to push up costs for companies.

“For investors, inflation poses the biggest threat to their portfolios,” added Giles Coghlan, an analyst at contract-for-difference trading firm HYCM. “Such a large fiscal package could contribute to elevated prices in the medium to long term that could inflict further damage to an economy.”