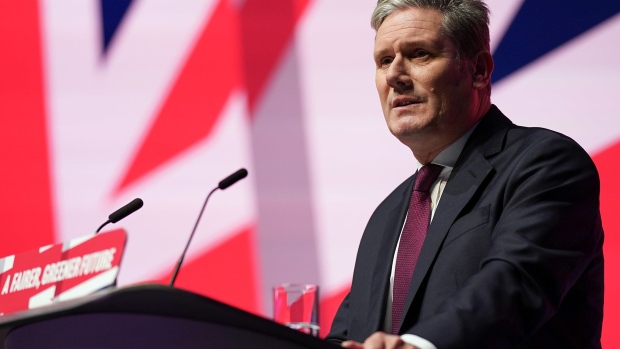 LIVERPOOL, ENGLAND - SEPTEMBER 25: Labour leader Keir Starmer speaks to party members during a tribute to the late Queen Elizabeth II on day one of the Labour Party's annual conference on September 25, 2022 in Liverpool, England The Labour Party hold their annual conference in Liverpool this year. Issues on the agenda are the cost of living crisis, including a call for a reinforced windfall tax, proportional representation and action on the climate crisis. (Photo by Ian Forsyth/Getty Images) , Photographer: Ian Forsyth/Getty Images Europe

Labour leader Keir Starmer blamed the Conservative government for the “real turmoil” in UK financial markets and warned that working people would pay the cost.

Ordinary Britons will have to endure higher mortgages and prices as a result of the government’s fiscal plans, Starmer said Monday at a Bloomberg business event at Labour’s party conference in Liverpool, northwest England.

The opposition leader’s remarks came after Chancellor of the Exchequer Kwasi Kwarteng on Friday announced the biggest tax giveaway in half a century, sparking a selloff in the pound and gilts amid market concern about rising government debt and inflation.

“The net result of Friday so far is taxes down for the richest and prices up for working people,” Starmer said. He added that the country was “very worried” about the message Liz Truss’s government was sending.

The pound tumbled to an all-time low when markets opened Monday, fueled by Kwarteng’s comment on Sunday that there’s “more to come” on tax cuts. The market ructions have prompted calls for aggressive rate hikes from the Bank of England, with some urging emergency action as soon as this week.

Labour sought to capitalize on the turmoil by portraying itself as the party of fiscal responsibility. Shadow Chancellor Rachel Reeves, a former BOE economist, on Monday accused Kwarteng of working at cross-purposes with the central bank.

“The Bank of England has got its foot on the brake and the chancellor has got his foot on the accelerator,” Reeves said in a Bloomberg TV interview. When asked if the BOE should intervene, she said it has a “clear mandate to control inflation” and there “will be further pressure on the bank to increase interest rates.”

Starmer separately spoke in conversation with Bloomberg LP European Director Constantin Cotzias in front of around 200 business representatives on Monday.

“I strongly believe in a government that partners with business,” Starmer said. “We see business as a force for good, as the driver of our economic growth.”

With the next general election expected in 2024, Labour is redoubling its efforts to portray itself as the party of business -- just as Tony Blair’s Labour did before taking office in 1997 -- and not let the Conservatives take the mantle of the party of growth.

Hope in a Labour government was now “turning into a belief,” Starmer said, and the party was “gunning for” an outright win at the next election. “I’m determined we can get a majority.”

A Savanta ComRes survey for the LabourList website on Sunday gave the opposition a 12-point lead over the ruling Conservatives, with seat-by-seat analysis suggesting they’re on course for a 56-seat majority. The polling was conducted before the government detailed its fiscal plan.

Pressed by one business leader on whether he would join forces with either the Scottish National Party or the Liberal Democrats, Starmer ruled out a deal with the SNP “in any circumstances whatsoever.” He said there was “no basis” for an arrangement with the SNP, given its demands for an independent Scotland.

Starmer was less clear on the Liberal Democrats, potentially leaving the door open for a post-election deal. He also suggested that Labour would give the Lib Dems a free run to fight Tory-facing seats they had the best chance of winning, and vice versa.