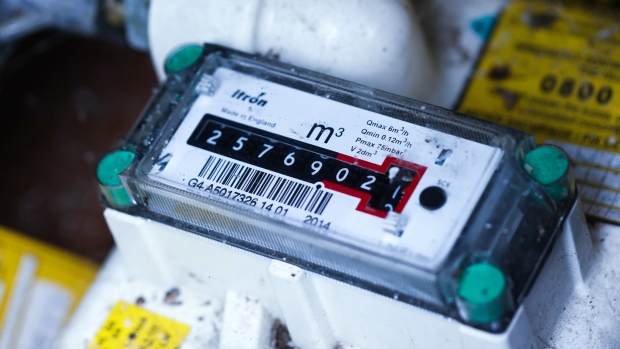 An analogue gas meter outside a customer's home in Danbury, U.K., on Thursday, Oct. 21, 2021.. European energy prices soared to fresh records amid worsening fears over supply, with U.K. natural gas futures exceeding the threshold of 300 pence a therm for the first time ever. Photographer: Chris Ratcliffe/Bloomberg , Bloomberg

(Bloomberg) -- The UK plans to allow some natural gas projects to be labeled as sustainable in its green investment rulebook due to be published later this year.

Gas is needed as a transition fuel to replace coal in power generation and Britain’s proposals are likely to be in line with European Union measures put forward earlier this year, according to a person familiar with the government’s thinking, who declined to be identified because the discussions aren’t public.

The UK plan is likely to draw the same criticism leveled against the EU’s program, which green campaigners say undermines the push toward renewable energy. But Britain is increasingly focused on reviving domestic energy production since Russia’s war in Ukraine, and a green label for gas could potentially attract the private financing needed to help the overall transition to a low-carbon economy.

The UK’s plan to phase out coal by 2024 was a key part of Prime Minister Boris Johnson’s campaign at the COP 26 climate talks last year. The Committee on Climate Change, which advises the government, says that gas generation needs to use carbon capture and storage technology after 2035 if emissions reduction goals are to be met.

A surge in gas prices led the government to hold talks with the nation’s three remaining coal operators about the possibility of keeping stations running next winter after two of them would have otherwise shut down permanently.

The war is being viewed by many policymakers and companies as a chance to accelerate the energy transition away from fossil fuels, but in the short-term it may increase emissions. The push to reduce reliance on Russian gas in Europe is prompting countries like Germany and Italy to also rely more on heavily-emitting coal in the short-term.

In January, the European Union announced plans to temporarily label some gas investments as green where they replace coal. Such plants have to obtain construction permits before the end of 2030, and have plans to switch to renewable or low-carbon gases by the end of 2035.

The EU’s investment classification system, known as taxonomy, aims to ensure that labeling gas and nuclear projects as sustainable investments gets political support while avoiding the risk of overstating the significance of emissions cuts. Yet for some, classifying such projects as green would harm the entire taxonomy system.

“Natural gas is not ‘green’ and its inclusion in the EU green taxonomy has completely discredited it,” said Ben Caldecott, director of the Oxford Sustainable Finance Group at the University of Oxford. “We can have a robust, science-based green taxonomy that is adopted worldwide because it is trusted by the market, thereby supporting UK leadership in green finance, or we can end up with something that is irrelevant because it has become debased.”

The Telegraph reported Friday that Britain was considering including gas in its green investment guidelines.