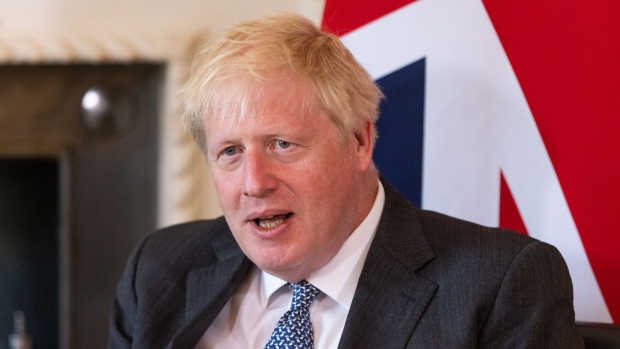 Boris Johnson, UK prime minister, ahead of a bilateral meeting with Antonio Costa, Portugal's prime minister, at 10 Downing Street in London, UK, on Monday, June 13, 2022. Johnson risks reopening divisions that tore his Conservative Party apart in 2019, with his government set to propose a law that would let UK ministers override parts of the Brexit deal he signed with the European Union. , Bloomberg

(Bloomberg) -- Boris Johnson’s bill to override the Brexit deal he negotiated survived a challenge in the House of Commons from opponents in the prime minister’s own Conservative Party -- including his immediate predecessor, Theresa May -- as members of Parliament voted to allow it to proceed to the next legislative step.

MPs voted by 295 to 221 to allow the Northern Ireland Protocol Bill to pass its second reading in the Commons, meaning it now progresses to the so-called committee stage, when the text will be considered line-by-line and amendments will be considered.

But the debate exposed the fractures that remain over EU relations within Johnson’s Tories, as MPs including May, former International Development Secretary Andrew Mitchell and Northern Ireland Select Committee Chairman Simon Hoare panned the proposal, saying it broke international law and damaged the UK’s reputation.

“I cannot support it,” May said. “It will diminish the standing of the United Kingdom in the eyes of the world.”

The timing was particularly awkward for Johnson as he met European Union leaders at the Group of Seven summit in Germany. His plan would allow Britain to unilaterally amend the post-Brexit settlement for Northern Ireland, risking a trade war with the EU.

The legislation has provoked renewed legal action from the EU and soured relations with the UK’s biggest trading partner. Speaking at the G-7 on Monday, Johnson told reporters his proposal could be carried out “fairly rapidly” and he wants it done by year-end.

“We could do it very fast, Parliament willing,” Johnson said.

But the bill could take as long as a year to pass Parliament and become law if the upper House of Lords digs in.

Johnson’s government argues the legislation is necessary to address disruption to trade caused by the Brexit deal it signed, which created an effective customs border between Northern Ireland and mainland Great Britain. It also wants to restore the region’s power-sharing executive, which has collapsed due to the Democratic Unionist Party’s opposition to the protocol.

Foreign Secretary Liz Truss said on Monday that ministers had to proceed with the plan because the EU isn’t being sufficiently flexible in negotiations and won’t agree to change the text of the protocol.

“We simply cannot allow this situation to drift,” Truss said, insisting the plan is legal. The bill will “fix the practical problems the protocol has created.”

The changes the UK government wants to make to the protocol include reducing customs paperwork for traders sending goods across the Irish Sea, stripping the European Court of Justice of its role in settling disputes and extending UK subsidy controls and tax breaks to Northern Ireland.

Legal experts have widely criticized the position as being in breach of international law, a claim that was also made by the dissenting Tory MPs. Hoare called the plan a “failure of statecraft” and said the arguments for it are “flimsy at best and irrational at worst.” Mitchell said the move “trashes our international reputation” and “threatens a trade war when our economy is flat.”

An EU trade war is a prospect because the bloc says the post-Brexit trade agreement is conditional on Britain respecting the terms of their divorce, of which the so-called Northern Ireland protocol was a key part.

The EU’s chief Brexit negotiator, Maros Sefcovic, told reporters during a trip to Oslo on Monday that the UK plans mean “constant uncertainty.”

“What we are communicating to our UK partners is ‘come back to the negotiating table, respect international law,’” he said. “Because if the bill would be adopted as drafted, we simply have to keep all options on the table.”