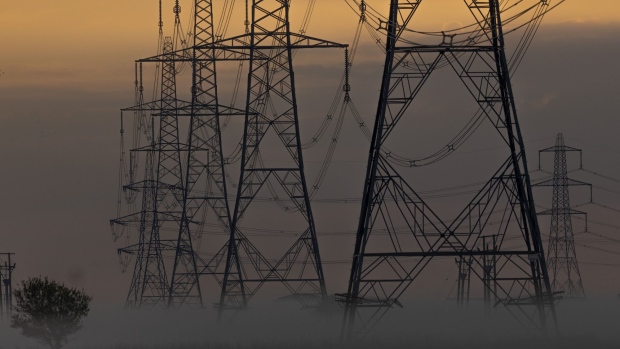 Electricity pylons and power lines in morning mist on the Isle of Grain, UK, on Monday, Aug. 22, 2022. The UK is about to receive liquefied natural gas from far-off Australia for the first time in at least six years, highlighting the European regions desperation in grappling with its worst energy crisis in decades. Photographer: Jason Alden/Bloomberg , Bloomberg

(Bloomberg) -- The UK is opening its latest licensing round to develop offshore areas for natural gas and oil production in an effort to ease the energy-supply crunch.

The government’s North Sea Transition Authority will take applications to explore areas that could lead to more than 100 licenses. While such rounds happen regularly in the UK, officials are trying to spur quicker development amid a cost-of-living crisis driven by soaring natural gas prices.

“Putin’s illegal invasion of Ukraine means it is now more important than ever that we make the most of sovereign energy resources, strengthening our energy security now and into the future,” Business and Energy Secretary Jacob Rees-Mogg said in a statement. “Ensuring our energy independence means exploiting the full potential of our North Sea assets to boost domestic production.”

Applicants are encouraged to seek licenses in four areas in the Southern North Sea where the NSTA sees the best chance of speedy production. However, it’s not clear that oil and gas will flow from the sites any time soon. Meaningful production would probably take a decade to come online, according to recent analysis from Wood Mackenzie.

The slow projected timeline adds to ire from climate activists who point out that the government could make a bigger impact in the near term with other measures like boosting energy efficiency of British homes.

“New oil and gas licences won’t lower energy bills for struggling families this winter or any winter soon nor provide energy security in the medium term,” Philip Evans, a campaigner for Greenpeace UK, said in a statement.