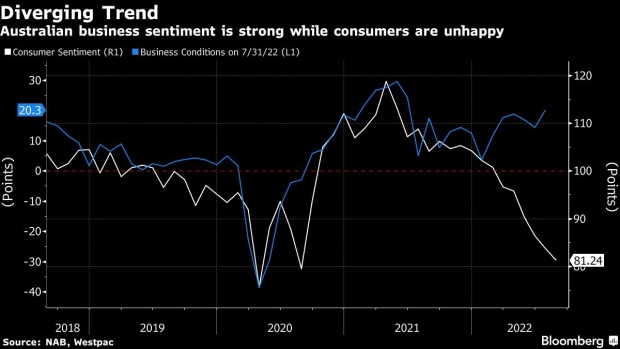 Rampant inflation may be showing some signs of slowing in the US, but the surge on the other side of the Atlantic looks to have further to run.

UK figures due Wednesday are expected to show price gains hit 9.8% in July -- the latest step on a march higher that the Bank of England predicts will reach more than 13% by October.

The release forms the centerpiece of a flurry of data in Britain that also sees reports covering unemployment, wage growth, retail sales, and public finances.

Inflation is peaking later and higher in the UK than in the US, partly as a result of its energy price-cap mechanism that slows the passthrough of higher prices to British households. Cornwall Insight has predicted the typical annual bill will rise about 81% in October, to more than £3,500.

The jump in prices is heaping pressure on the UK government to do more to help consumers, and forcing the BOE to take drastic action to curb headline inflation already almost 5 times the official 2% target.

Officials hiked interest rates by a half-point earlier this month, even as they forecast that a run of seven quarters without growth would start later this year.

On top of that headache, the central bank is also getting dragged into the battle to replace Boris Johnson as prime minister, with front-runner Liz Truss saying she’ll reexamine the BOE’s mandate if chosen by Conservative Party members.

“Our base case is for a 25 basis-point hike at the central bank’s next meeting in September, but signs that high inflation may become embedded could tip the balance in favor of another 50 basis-point move.”

Elsewhere, another round of rate hikes from New Zealand to Norway, signs of a mild pickup in Chinese data, and Japan’s return to pre-pandemic growth may be among the highlights of the week.

Click here for what happened last week and below is our wrap of what’s coming up in the global economy.

In the US, investors’ sights will be focused squarely on the government’s July retail sales report to help gauge the progression of consumer spending after a second-quarter slowdown.

Economists project the release on Wednesday will show sales cooled from the prior month, even after accounting for an expected fuel-price-related decline in receipts at gasoline stations. The figures aren’t adjusted for inflation.

The median forecast calls for a 0.1% increase in the total value of retail receipts after a 1% gain a month earlier.

Aside from restaurants and other food service establishments, the data are a report card on merchandise demand. Most US spending is for services, and those figures will be released later this month with the personal income and spending report.

Meantime, the Federal Reserve will issue minutes on Wednesday of its July policy meeting. Investors will parse the release for hints of central bankers’ appetites for a third straight 75 basis-point rate increase in September.

China sets its medium-term lending rate on Monday and with ample liquidity and rising inflation, the window may have closed on the potential for any reduction.

The monthly data dump also due Monday is likely to show a modest pickup in July, though the outlook remains clouded by restrictions to curb fresh Covid outbreaks.

In Japan, second quarter gross domestic product data are set to show the world’s third-largest economy is back to its pre-pandemic size, although that’s unlikely to sway Bank of Japan Governor Haruhiko Kuroda and his determination to stick with easing.

Later in the week, trade data will give a reading on global demand, while Japanese inflation numbers may show another acceleration.

New Zealand’s central bank will make its latest policy decision on Wednesday, with another half-point hike expected. That would bring the official cash rate to a seven-year high.

In Australia, jobless data for Thursday could spur further bets for rate hikes if they show more tightness in the labor market. An index of business sentiment in the past week showed further gains there, with hiring, sales and profits all advancing.

Sri Lanka and the Philippines also set rates on Thursday.

In a quiet week for Europe, the region’s highlight is likely to be Norway, where inflation has consistently exceeded the central bank’s forecasts.

Economists anticipate officials will break with their habit of avoiding rate moves at so-called interim meetings and go ahead with another half-point increase to 1.75%.

Norway will also release second-quarter GDP data on Thursday, which is likely to show growth after three months of contraction.

The euro zone will confirm an earlier assessment of growth for the same period on Wednesday, alongside statistics from the Netherlands. The Dutch economy, the region’s fifth-largest, is expected to have extended its expansion into a sixth quarter.

Germany’s ZEW indicator of investor sentiment on Tuesday is the other key indicator due in the single currency area, with worsening anticipated by economists.

Meanwhile, the Rhine River is set to continue shriveling early into this week, further restricting the supply of vital commodities to parts of inland Europe as the continent battles with its worst energy crisis in decades

GDP data are due across Eastern Europe on Wednesday. Poland and Romania are seen likely to have contracted in the second quarter, while Hungarian growth probably slowed.

In Africa the same day, Namibia’s central bank will probably match neighboring South Africa’s decision last month to raise its rate by 75 basis points in a bid to safeguard its currency peg with the rand. Zambia will probably leave the cost of borrowing unchanged at 9%.

On Thursday, Egypt may make its third rate hike of the year. Markets are watching for any signs that the central bank is preparing to let the currency fall further after a devaluation in March.

The same day, Turkey is expected to hold rates at 14% for the eighth month in a row despite annual inflation accelerating close to 80%.

In Peru, year-on-year economic activity probably decelerated for a fourth month in June while a new round of pension savings withdrawals may have powered a second straight monthly expansion.

In Colombia, analysts expect some easing in the June GDP-proxy data from May. That said, the quarterly output figures posted Tuesday should underscore the scorching demand that has JPMorgan and Goldman Sachs economists marking up their 2022 GDP forecasts to 7% or better, well above regional peers.

Chile’s economy is grinding lower. Analysts expect second-quarter output results published this week to show the nation avoided recession in the first half, but may fail to do so in the second six months of 2022.