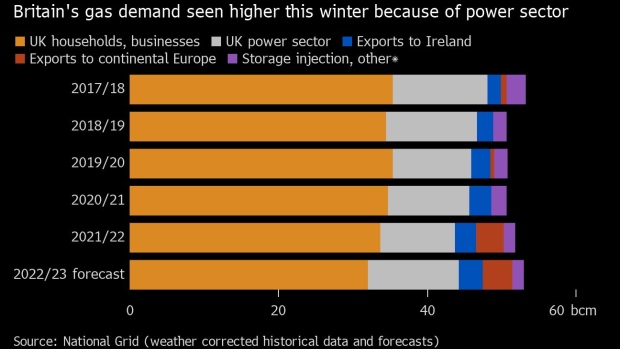 Britain’s grid operator warned that some customers face the risk of three-hour power cuts on cold, calm days as the country heads into winter with the smallest margin of back-up power supplies in seven years.

That’s according to one scenario outlined by National Grid Plc in its latest winter outlook, which also included for the first time the impact of having no electricity imports from continental Europe. Such an event would trigger emergency measures, including firing up a reserve of coal generators and leaning heavily on large consumers to reduce demand at peak hours.

The outlook comes as the UK faces an unusually high risk of tight energy supplies this winter, with Europe racing to replace reduced natural gas exports from Russia and Electricite de France SA struggling with outages at its nuclear plants that usually help power Britain. Surging energy prices have led the UK to commit almost £200 billion ($225 billion) to soften the hit to consumers and limit the prices charged to households and businesses.

Under its base case, the grid expects a margin for power capacity -- the difference between demand and supply -- of 6.3%, or 3.7 gigawatts, this winter. While that’s enough to avoid power shortages, it’s the lowest margin since 2015 and less than what National Grid expected in a preliminary outlook in July.

Under a more stressed scenario, when the weather is cold and there’s low wind generation, there could be the potential need to interrupt supply to some customers for limited periods of time in a controlled manner, National Grid said.

“We do have good energy supplies in the UK, we can get through the winter,” Prime Minister Liz Truss said at a European summit in Prague. “But of course, I’m always looking for ways that we can improve the price for consumers... as well as making sure that we have as much supply as possible.”

“The invasion of Ukraine by Russia and resultant reduction in gas supplies to continental Europe has created unprecedented uncertainty for energy markets,” the grid said in its gas outlook. “No one can accurately predict what will happen this winter against such a complex and uncertain backdrop.”

A more extreme scenario where gas supply isn’t adequate to keep power stations running could see rolling power cuts, or “load-shedding,” according to the outlook.

“In the unlikely event we were in this situation, it would mean that some customers could be without power for pre-defined periods during a day, generally this is assumed to be for 3 hour blocks,” National Grid said in the report.

The largest stress on gas demand will be for electricity generation if there isn’t enough power available to import from countries like France or Norway. National Grid expects a 22% increase in gas demand for power plants compared with last winter.

Total gas demand, including the UK’s domestic consumption and higher exports to continental Europe and Ireland, is expected to hit 53.1 billion cubic meters this winter, rising about 2% on last year to a five-year high. This may be even higher, depending on the weather and supply conditions.

The gas supply situation is hard to predict. Britain has its own production in the North Sea, as well as imports from Norway and liquefied natural gas from across the globe, but there’s no guarantee that will be enough this winter. The UK has the one of the largest LNG import capacities in Europe which it needs to rely on instead of gas storage which is largely closed.

The government has paid as much as £395 million for coal units run by Drax Group Plc, Uniper SE and EDF to stay online past their planned closures in September. Those would be used when there’s not enough power supply on the wholesale market, particularly if there’s import shortages from European interconnectors.