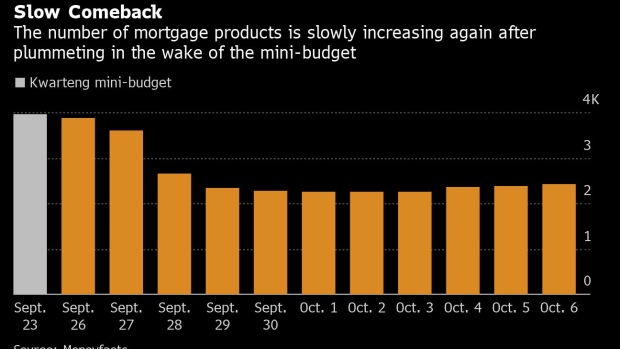 Kwasi Kwarteng, UK chancellor of the exchequer, delivers his keynote speech during the Conservative Party's annual autumn conference in Birmingham, UK, on Monday, Oct. 3, 2022. Liz Truss is standing by Kwarteng after the threat of a rebellion in the ruling party forced them into a humiliating reversal on a plan to cut taxes for the top earners in the UK. , Bloomberg

(Bloomberg) -- The cost of a five-year fixed-rate mortgage breached 6% for the first time in more than a decade as UK Chancellor of the Exchequer Kwasi Kwarteng meets with the nation’s biggest lenders.

The average five-year fixed-rate mortgage on a home rose to 6.02% on Thursday, the highest since February 2010, according to Moneyfacts Group Plc. That’s as the average two-year fixed-rate deal rose to 6.11% after passing the 6% threshold for the first time in almost 14 years on Wednesday.

Mortgage rates at 6% will cost the holder of a two-year fixed mortgage about £10,000 ($11,264) more over the period compared with the same type of home loan taken out last December when rates were about 2.34%, according to data compiled by Moneyfacts Group Plc. That’s based on a mortgage of £200,000 borrowed for 25 years.

The news comes as Kwarteng meets with executives from banks including Barclays Plc and Natwest Group Plc on Thursday in part to quiz the lenders on their plans after they pulled more than 40% of mortgage products from the market following the chancellor’s so-called mini-budget, which roiled markets on Sept. 23. That sent yields soaring on interest-rate swaps, which lenders use to price mortgage products.

The Truss-Kwarteng package resulted in banks pulling mortgages off the market, straining the affordability of property. Those products are slowly returning the market, but higher borrowing costs mean the average monthly price of a two-year fixed-rate mortgage will rise to about £1,325 ($1,500) per month, from £725 in 2021, Bloomberg Economics estimated last week.