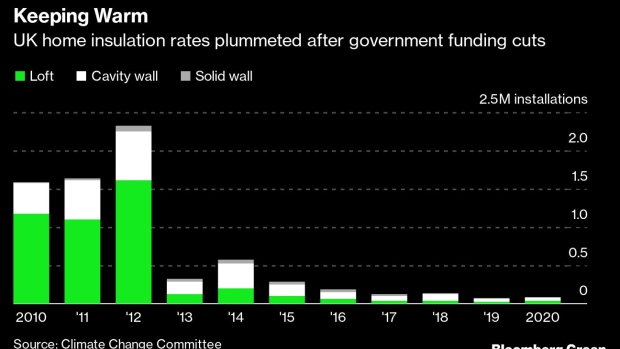 The UK will miss its energy targets without an additional tens of billions of pounds of funding for the government’s new home insulation program, ministers have been privately warned.

If Prime Minister Rishi Sunak’s headline goal of reducing energy demand by 15% by 2030 is to be met, more money will be required, an official familiar with the internal government advice told Bloomberg. Moreover, officials have told ministers significant new regulations will need to be imposed on businesses and private landlords to set a minimum energy standard, the person said.

Business, Energy and Industrial Strategy Secretary Grant Shapps said Monday that the government will spend £1 billion ($1.2 billion) on a new plan to insulate homes in council tax bands A to D, typically owned by people on lower to middle incomes. That money is in addition to £12.6 billion of cash already pledged by the government through to 2028, and will be enough to “enable thousands more to insulate their homes,” Shapps said.

Sunak’s administration is attempting to do what successive Tory governments have tried and failed to achieve over the past decade: roll out energy efficiency measures at scale across Britain’s leaky housing stock.

But despite Chancellor of the Exchequer Jeremy Hunt earlier this month announcing £6 billion of fresh funding for measures from 2025 through 2028 -- adding to an existing £6.6 billion -- the latest effort falls well short of what will be required to insulate enough homes to adequately put a dent in overall UK energy consumption, according to the official.

The shortfall between the spending committed and what is needed is estimated to be in the tens of billions, they said. While the private sector would be invited to contribute, it is unclear how the government planned to make up the deficit, the official said.

The Department for Business, Energy and Industrial Strategy did not immediately respond to a request for comment.

As well as more money, officials have told ministers they should draw up extensive new regulations to help hit the energy efficiency target.

That could include requiring landlords to ensure their properties meet the Energy Performance Certificate “Band C” grading before they’re allowed to rent them out from 2025. Businesses could also be required to meet equivalent energy efficiency standards on a similar timescale.

Home insulation rates fell off a cliff following funding cuts brought in by former Tory premier David Cameron in the early 2010s, even though energy efficiency is often described as the low-hanging fruit to achieve greenhouse gas cuts and lower power and heating bills. The total cost of wasted energy for households and government will be almost £13 billion ($15 billion) between October 2022 and October 2024, according to the Local Government Association.

A new government task force will seek to meet the demand reduction target by expanding a series of programs available to help people improve energy efficiency in their homes. Currently, low-income households and people on certain benefits can receive free energy efficiency improvements such as insulation through their energy supplier and local council.