Federal Reserve officials played down the risk that the US economy will tip into recession, even as they raise interest rates with another 75 basis-point hike on the table next month.

New York Fed President John Williams and San Francisco’s Mary Daly both acknowledged on Tuesday they had to cool the hottest inflation in 40 years, but insisted that a soft landing was still possible.

“I see us tapping on the brakes to slow to a more sustainable pace, rather than slamming on the brakes, going over the handlebars and having the proverbial recession,” Daly told an online event hosted by LinkedIn. “I wouldn’t be surprised, and it’s actually in my forecast, that growth will slip below 2%, but it won’t actually pivot down into negative territory for a long period of time.” 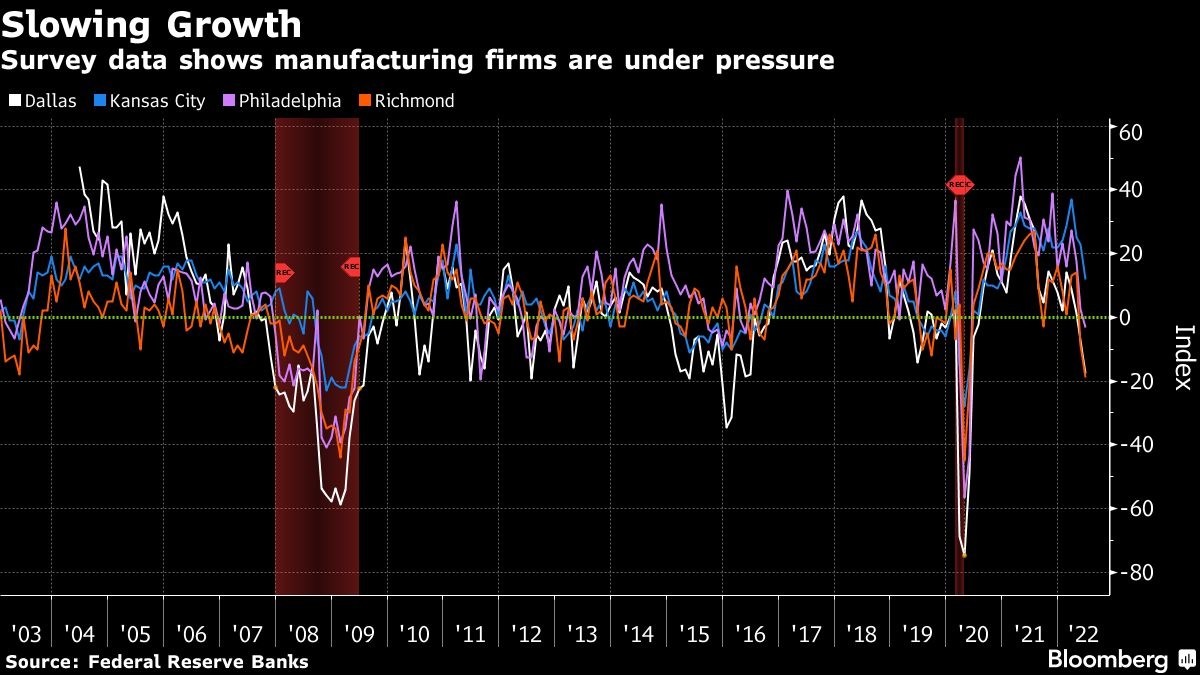 Fed officials have pivoted to more aggressive rate increases as they fight the hottest inflation in 40 years, following criticism that they left monetary policy too easy for too long as the economy rebounded from the pandemic.

The Fed raised its benchmark rate earlier this month by 75 basis points -- the biggest increase since 1994 -- to a range of 1.5% to 1.75%. Chair Jerome Powell told reporters after the meeting that officials could consider another 75 basis-point increase, or a 50 basis-point hike, when they meet next month.

Powell will speak at 9 a.m. Washington time Wednesday on a panel during the European Central Bank’s annual policy forum in Sintra, Portugal.

Williams closely echoed the Fed chair, telling CNBC in an interview earlier Tuesday that “in terms of our next meeting, I think 50 to 75 is clearly going to be the debate.”

The policy maker said he supports raising the Fed’s benchmark interest rate to a range of 3% to 3.5% by later this year, and that the path for 2023 will depend on the data -- though current bets in financial markets for rates to be around 3.5% to 4% next year are “a perfectly reasonable projection right now.”

Investors are almost fully pricing a 75 basis point increase at the Fed’s July 26-27 meeting and see rates peaking around 3.6% next year, which is slightly below the 3.8% projected in the latest quarterly dot plot of Fed rate forecasts released June 15.

Some other policy makers, including Fed Governor Michelle Bowman and Governor Christopher Waller, have since backed a 75 basis-point hike next month. Minneapolis Fed President Neel Kashkari and Chicago’s Charles Evans said it would be reasonable to consider another increase of that size and Daly has called a 75 basis-point increase a good place to start the debate.

Consumer prices rose 8.6% last month from a year ago, according to the Labor Department. The CPI report for June will be published July 13.

The New York Fed chief also said he expects economic growth to cool and the unemployment rate to rise as the Fed hikes borrowing costs to tame inflation, but he doesn’t project a recession.

“I am expecting growth to slow this year, quite a bit, relative to what we had last year, and actually to slow to probably 1% to 1.5% GDP growth,” he said, indicating that he has one of the lower forecasts among the Fed’s 18 policy makers, based on the 1%-2% range of their quarterly growth estimates updated earlier this month.

“But that is not a recession. It’s a slowdown we need to see in the economy to reduce the inflationary pressures that we have and bring inflation down.”