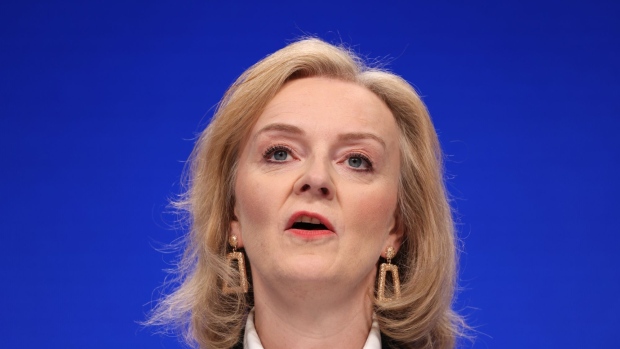 Liz Truss, U.K. foreign secretary, speaks on the first day of the annual Conservative Party conference in Manchester, U.K., on Sunday, Oct. 3, 2021. In a quirk of timing, the Conservative conference is bookended by the phasing out of two major support measures credited with staving off an unemployment crisis and limiting the numbers falling into poverty during the pandemic. Photographer: Hollie Adams/Bloomberg , Bloomberg

Liz Truss warned of the importance of not becoming overly reliant upon China, in an indication of her priorities as the U.K.’s new foreign secretary.

The U.K. intends to “build a network of liberty” with nations with similar values of democracy and free markets, while also keeping strong economic links with the superpower, Truss told the Telegraph in an interview.

The U.K. government has tried to maintain cooperation with the global superpower, while sometimes criticizing its record on human rights.

The U.K. government and Prime Minister Boris Johnson have tread a delicate balance between underscoring the need for maintaining cooperation with the global superpower, and criticizing its human rights record. Johnson said he’s not about to “pitchfork away” offers of Chinese investment, in an interview this week with Bloomberg News Editor-in-Chief John Micklethwait.

Truss, 46, took on her new role as part of a Cabinet reshuffle after navigating post-Brexit trade deals as international trade secretary.

She also discussed in the interview whether the U.K. could see Chinese state-owned companies building new nuclear plants in the U.K., saying it’s “important” to work with “reliable” partners in areas such as critical national infrastructure, cybersecurity and 5G technology.

Addressing current global supply chain bottlenecks, Truss said it was critical that the U.K. not be overly reliant on Chinese imports.

“What we saw during the Covid crisis is whether it’s a particular supply chain for pharmaceutical products or for technology products, it’s important that we have a diversity of supply,” she told the Telegraph.