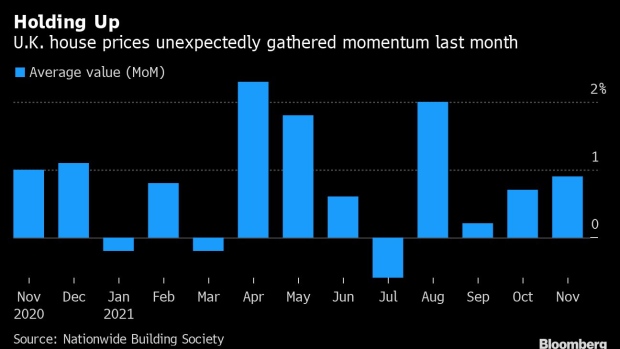 Terraced housing near the site of the Devonport freeport in Plymouth, U.K., on Thursday, March 4, 2021. U.K. Chancellor Rishi Sunak unveiled Devonport among the roster of eight English freeports, low-tariff business zones being created to stimulate trade and investment in the wake of Brexit and the coronavirus crisis. Photographer: Jason Alden/Bloomberg , Bloomberg

U.K. house prices rose more than expected in November as activity held up despite the end of a tax relief for homebuyers, Nationwide Building Society said on Wednesday.

October saw the ending of a tax cut on house purchases that has helped fuel a boom since it was introduced in July 2020. But other factors supporting the market remained in place, including shortages of homes for sale and pandemic-driven demand for larger properties away from city centers.

Borrowing costs have also stayed low, underpinning prices, despite the prospect of an increase in U.K. interest rates in December. Figures from the Bank of England showed that tough competition between lenders brought the efffective rate on new mortgage lending down to 1.59% in October, the lowest on record.

Nationwide nonetheless warned of a squeeze on living standards for households, with inflation accelerating, interest rates poised to rise and tax increases set to hit in the spring. The new omicron coronavirus variant could make people more cautious about spending, it added.

“The outlook remains uncertain, where a number of factors suggest the pace of activity may slow. It is unclear what impact the new omicron variant will have on the wider economy,” said Robert Gardner, Nationwide’s chief economist.

“Even if economic conditions continue to improve, rising interest rates may exert a cooling influence on the market,” he added. “Indeed, house price growth has been outpacing income growth by a significant margin and, as a result, housing affordability is already less favorable than was the case before the pandemic struck.”