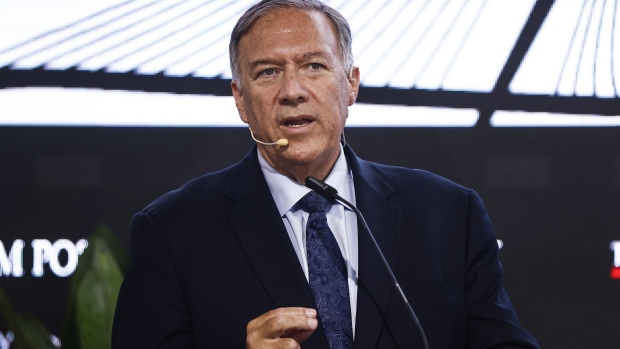 (Bloomberg) -- The House committee investigating the Jan. 6, 2021 attack on the US Capitol is expected to speak behind closed doors Tuesday with former Secretary of State Mike Pompeo, a person familiar with the plans said.

Separately, Doug Mastriano, the Republican nominee for governor in Pennsylvania and an ally of former President Donald Trump, abruptly ended his virtual deposition by the committee Tuesday before being sworn-in over a dispute on how the questioning will be conducted. His lawyer said he will file a legal challenge in US District Court.

Committee members, including Vice Chair Liz Cheney, have signaled for weeks in TV appearances and in a public hearing that the panel was anticipating talking to members of Trump’s cabinet.

Cheney said at a June 9 public hearing that some Trump cabinet members discussed after the riot the possibility of invoking the 25th Amendment to replace him as president, prior to the official presidential transition to Joe Biden on Jan. 20. In his book, “Betrayal,” Jonathan Karl of ABC News reported that Pompeo and then-Treasury Secretary Steven Mnuchin were among those talking about that removal process.

Removing Trump under the amendment would have required then-Vice President Mike Pence and the majority of the Trump cabinet to go along, which did not happen.

Betsy DeVos, who was Education secretary under Trump, told USA Today she raised with Pence whether the cabinet should consider the 25th Amendment. She said Pence made it clear he was “not going to go in that direction.”

Mastriano was subpoenaed to testify because of his involvement in a plan to arrange for an “alternate” slate of presidential electors from Pennsylvania for Trump, and because he had direct conversations with then-President Trump “about post-election activities,” according to a February letter from committee Chairman Bennie Thompson.

Mastriano’s lawyer, Timothy Parlatore, said he halted his client’s potential virtual testimony Tuesday less than 15 minutes after it was to start -- before any questions were answered. He argued that without any genuine, adversarial Republican membership the committee lacks authority to a compel a deposition, unless other protections are in place for Mastriano.

One protection Parlatore said he proposed was for the committee to agree to not edit video of Mastriano’s answers for release to avoid misleading or out-of-context snippets being used to harm his campaign for governor. They also suggested the panel could allow Mastriano or some outside observers to do their own recordings. But he said the committee rejected that.

“To be clear, if they called us back this afternoon agreeing to that, we’d go, ready to cooperate,” said Parlatore.

Parlatore said he intends to file legal action on behalf of Mastriano in US District Court in Washington, D.C., later this week, arguing a adversarial system is required to conduct depositions. He said the House committee offers no such system with only two Republican members, who were chosen by Speaker Nancy Pelosi. He said they are ideologically aligned with Democrats on issues related to the Jan. 6 Capitol attack.

Parlatore says this is a distinct legal argument apart from one already rejected by courts that the committee has no legitimate subpoena power. He said this goes to the rules of conducting depositions and the rights of witnesses.

The Senate Judiciary Committee detailed in an October 2021 report how Mastriano raised “a litany of false and debunked claims of widespread election fraud in Pennsylvania.” That report said he aired some of these at a Nov. 25, 2020, “hearing” at a hotel in Gettysburg, Pennsylvania, featuring Trump campaign lawyers Rudy Giuliani and Jenna Ellis, which included a phone call from Trump himself.

The Senate report also said Mastriano took a lead role in the “Stop the Steal” movement, spending thousands of dollars from his campaign account to charter buses to Washington for Trump’s rally on the Ellipse, the precursor to the Capitol riot. Mastriano also was on the Capitol grounds as the riot unfolded, the report states, although he has emphasized he never entered the building.

Amid these revelations, Mastriano won the Republican nomination for Pennsylvania governor in May with Trump’s backing against a crowded field. He is running against Democrat Josh Shapiro in the November election.