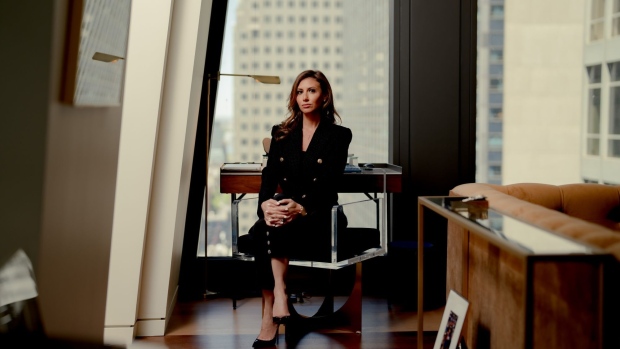 (Bloomberg) -- Alina Habba keeps a framed news article on a wall of her well-appointed five-bedroom mansion in New Jersey with a distinctive signature scrawled across it with a sharpie.

“Alina -- Great job!” former President Donald Trump wrote on the Nov. 12, 2021, story. The memento hails Habba’s work bringing to a successful end a 2017 lawsuit brought against him by a onetime “Apprentice” contestant who’d accused him of sexual assault and then sued him for defamation when he called her a liar.

Habba, 38, doesn’t have a big midtown law office or a huge firm behind her. But the graduate of Lehigh University and Widener University Commonwealth Law School in Pennsylvania does have the trust of her very high profile --and extremely litigious -- client.

Over the past year, Habba has taken over some of Trump’s highest priority legal fights, including challenges to the New York attorney general’s probe of his business and his defense in a fraud suit brought by his niece. In the process, she replaced several better-known lawyers who’d worked for Trump for years, like Marc Kasowitz and Lawrence S. Rosen.

“I’ve had many lawyers, but she’s somebody that I think has done a very, very good job,” Trump said in a phone interview last week from his Mar-a-Lago resort in Florida. “She’s very talented, she’s smart, she’s a very likable person.”

Being Trump’s lawyer has never been an easy task: Michael Cohen went to prison for tax fraud, bank fraud, violations of campaign finance laws and lying to Congress for his boss. Rudy Giuliani had his law license stripped in New York and the nation’s capital for his role in lawsuits seeking to overturn the result of the 2020 presidential election. Habba says she regularly receives harassing phone calls and hate-filled emails about her work on Trump’s behalf, including one recent message saying the writer would “pray nightly” for her children to die.

She regularly receives hate-filled emails for her work on Trump’s behalf, including one recent message saying the writer would “pray nightly” for her children to die

But she is undaunted and continues to spearhead an aggressive legal strategy long championed by her client, often opting to go to court (or threaten to do so) to cut off probes, prevent testimony and attack people who accuse Trump of wrongdoing.

Her track record so far has been mixed. In February, Habba lost a fight to prevent Trump from being deposed under oath in the probe by New York Attorney General Letitia James. Last month, a judge held Trump in contempt for failing to comply with James’s subpoena for his records. The judge faulted Habba’s explanation of her search for records, after she had personally scoured Trump’s offices in New York and Florida, saying the effort wasn’t good enough to justify Trump’s contention that he had no documents to hand over. The judge has since provisionally lifted the contempt order so long as Trump meets certain conditions by May 20, including paying a $110,000 fine.

Trump doesn’t fault Habba. He blames the judge overseeing the subpoena case for being “unbelievably unfair.” And he continues to give her more business: he hints that more lawsuits will come “in the not too distant future.”

Habba came into Trump’s orbit after becoming a member of his golf club in Bedminster, New Jersey, in 2019.  “I met her at the club. I said, ‘What do you do?’” Trump recalled. “Other people also know her at the club and they say she’s an excellent attorney, which she is. I gave her a couple of cases to handle; she did a very good job.”

There are other benefits to working with her small firm, he said.

“I have many big firms that I have, that I use, and can use if I want, but I’ve found that it’s extremely expensive,” Trump said. “I think that using a small firm -- even, in some cases, individual lawyers” is “very cost effective.”

She said it wasn’t necessarily her intention to replace any of Trump’s attorneys. After all, she says she was busy taking care of her two children and running her five-lawyer firm with offices in New Jersey and Manhattan, representing clients from mortgage servicers to commercial real estate firms. She said her firm in 2021 handled commercial transactions totaling more than $50 million.

“I was the attorney that was doing my job, and I was successful,” she said. “There were cases that I took on that big white-shoe firms -- no disrespect to them -- had had for years and they couldn’t resolve them. And I did.”

But once on board, Habba went on the offense for Trump, suing the people who’d dragged him into court. Habba took over the “Apprentice” case and threatened to sue the former contestant, Summer Zervos, for bringing the suit in bad faith. Zervos dropped it. Trump was thrilled.

She filed a $100 million countersuit against Mary Trump, accusing her of breaching a 2001 Trump family settlement by providing records to the New York Times for an award-winning report on Trump’s finances. She also sued James, accusing her of violating Trump’s constitutional rights by investigating him for her own political gain.

“He wanted to send a message that he’s just not going to be treated in this manner any more, and he was right,” Habba said. “I’ve never seen this kind of vitriol, and it’s sad.”

In March, Habba filed what might be Trump’s biggest attack yet, accusing Hillary Clinton, the Democratic Party and more than a dozen other defendants in a lawsuit of participating in a vast conspiracy to malign his character and cast doubt on the legitimacy of his 2016 election win.

Barbara McQuade, a law professor at the University of Michigan and former federal prosecutor, said Habba is following Trump’s long history of using “smoke and mirrors” litigation to attack rivals while “projecting on others his own shortcomings.”

They’re providing “talking points for the right wing media,” said McQuade, who isn’t involved in the cases. “It puts some manufactured evidence behind his claims that he was the victim and all these other people are out to get him.”

Habba, a Catholic who describes herself as “very religious,’’ says she is a true believer in Trump’s cause.  In the Bernardsville, New Jersey home she shares with her husband, a commercial real estate investor, she has two “Make America Great Again” hats signed by Trump and ensconced in glass boxes, as well as Trump-related books and a photo of the former president smiling with their children by a pool.

An avid golfer, Habba said her children go to summer camp at the club, which has around 300 members. "You see the president regularly," she said. "There's only so many of us. I see Melania. I see Ivanka when she's there. It's typical. And it's a very small community."

Habba and her two siblings were born in Summit, New Jersey, to Iraqi immigrant parents who thrived in the U.S. after fleeing persecution of Catholic Arabs in the early 80s. Her father, Saad Habba, is a well-known gastroenterologist who discovered the eponymous Habba Syndrome. She said she first became interested in law when a “beautiful, young, vibrant entertainment litigator” visited her all-girls school to talk about her career.

“She was doing such interesting work I just said, ‘Oh my god, I want to be like her,’” Habba said.

But first she studied political science at Lehigh University in Bethlehem, Pennsylvania, where she says she graduated a year ahead of her class. She then pivoted to the fashion world, working in accessories production and marketing with executives at Marc Jacobs. As much as she loved -- and continues to love -- high fashion, she said working in luxury renewed her interest in the law. But not for any bleeding-heart reasons.

“I decided I wanted to be able to actually afford the bags we made so I decided to go to law school,” she said.

A story in The Daily Beast in March described other members of Trump’s legal team as complaining about Habba and mocking her. Habba called the story false, and Trump claims it’s ``fake news.’’Habba said she’ll continue to push back on any suggestions that she isn’t qualified or that her methods are too aggressive. She said she’s “not a feminist” but knows sexism when she sees it.

“If I was an older gentleman from a white-shoe firm I’d be called a shark,” she said. “But because I’m a young female living in New Jersey I’m called a witch -- that bothers me.”