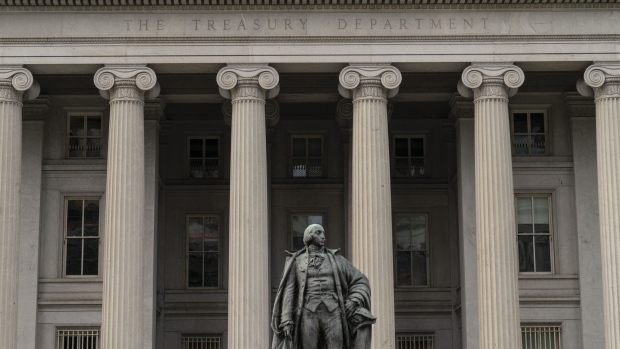 The US Treasury building in Washington, D.C., US, on Sunday, May 22, 2022. The Federal Reserve raised interest rates by 50 basis points earlier this month and the chairman indicated it was on track to make similar-sized moves at its meetings in June and July. , Bloomberg

(Bloomberg) -- A US House committee can now get a look at six years of Donald Trump’s tax returns, a week after the Supreme Court cleared the way for their release.

A Treasury spokesperson on Wednesday said the department complied with the court’s decision and made the documents available to the Ways and Means Committee, though wouldn’t confirm whether members of the panel have accessed them.

Committee member Bill Pascrell, a New Jersey Democrat, said the panel plans to meet Thursday morning to decide what to do with the former president’s tax returns.

The committee could vote to release them or a summary of their findings to all 435 members of the House, effectively making the information public. The tax-writing Ways and Means panel has argued it needs to see the returns to consider potential legislation on presidential compliance with tax rules, public accountability and mandatory Internal Revenue Service audit policy for presidents.

The Democratic-run committee has been racing the calendar to obtain the records before Republicans assume control of the House in January and last week’s decision gave them a late but resounding triumph.

The Ways and Means Committee has been seeking the documents since 2019. The Treasury Department had refused to comply with the request while Trump was in office and the committee then went to court.

Trump picked up the fight on his own when the department under President Joe Biden said it would turn over the documents. Trump’s lawyers argued that the House panel lacked a legitimate legislative purpose and was seeking to make the documents public for political reasons.

A federal appeals court in Washington ruled on a 3-0 vote that the committee was entitled to the documents. The Supreme Court last week rejected Trump’s bid to block the Internal Revenue Service from turning over the documents without explanation or any public dissents.

Though presidents and candidates for the White House aren’t required by law to make available their tax returns to voters, it has been common practice for decades. When he first ran for president in 2016 Trump broke with that tradition and declined to make public his returns.

--With assistance from Greg Stohr.