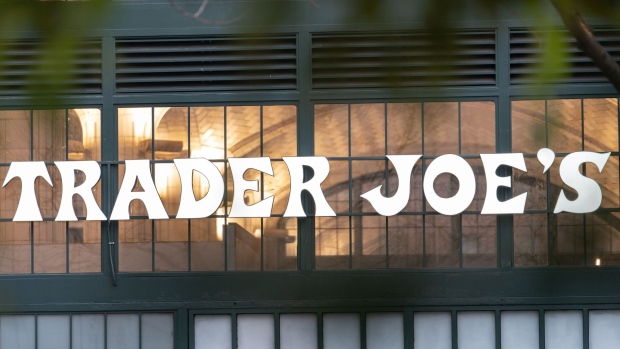 Signage outside the Trader Joe's Upper East Side Bridgemarket grocery store in New York, U.S., on Thursday, Dec. 2, 2021. The century-old vaulted market under the Queensboro Bridge has reopened on Thursday as a Trader Joe's. Photographer: Jeenah Moon/Bloomberg , Bloomberg

(Bloomberg) -- Trader Joe’s employees at a store in Minneapolis voted to unionize, expanding a foothold at the longtime union-free grocery chain and extending a wave of landmark organizing victories at retail outlets.

The National Labor Relations Board publicly counted the ballots Friday via a videconference, following two days of voting. Store staff voted 55 to 5 to join Trader Joe’s United, the same fledgling, worker-run group that won an election at a Hadley, Massachusetts, outlet last month. The chain, owned by Germany’s Albrecht family, operates about 10 stores in the area.

The victory, following wins at other leading companies like Starbucks Corp. and Amazon.com Inc., may help galvanize laborers elsewhere. Workers around the country have been reaching out to the Minnesota organizers, as well as those who voted to unionize at the store in Massachusetts.

“We’ve received messages from Trader Joe’s in every single state that has a Trader Joe’s,” Sarah Beth Ryther, a Minneapolis employee and union spokesperson, said earlier this week. “We’re riding a wave.”

Trader Joe’s said it is ready to negotiate with the union. The company, which operates more than 500 stores, said earlier it was prepared to start contract talks in Massachusetts.

“While we are concerned about how this new rigid legal relationship will impact Trader Joe’s culture, we are prepared to immediately begin discussions with their collective bargaining representative to negotiate a contract,” company spokesperson Nakia Rohde said in an email after the vote. “Trader Joe’s offers all of its crew members, across the country, an industry-leading package of pay, benefits, and flexible working conditions.”

Workers at the Minneapolis store want to increase pay and benefits and have a say in safety issues, including harassment by customers, according to the union. “We are attempting to hold Trader Joe’s to their values,” Ryther said. In the lead-up to the vote, managers told employees unionization would mean losing schedule flexibility and help from supervisors, she said.

In its statement, Trader Joe’s said it is “proud of our more than 50-year history of consistently supporting our crew.”

Along with victories at the two Trader Joe’s stores, hundreds of Starbucks cafes and a Staten Island Amazon warehouse, unions have prevailed this year in elections at an Apple Inc. store in Maryland, at Verizon Communications Inc. stores in Washington and in a vote by New York Times Co. tech employees.

Trader Joe’s staff at a Colorado store, organizing with the United Food & Commercial Workers International Union, petitioned last month to hold a vote of their own.