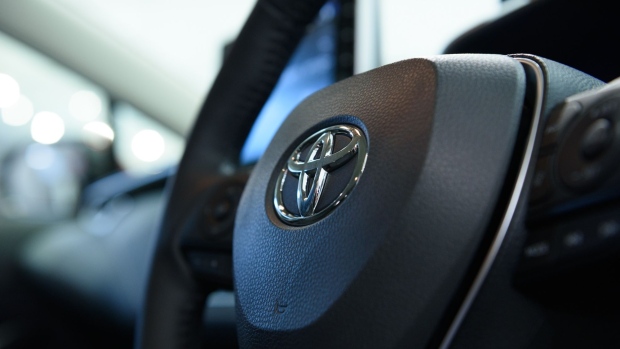 The Toyota Motor Corp. badge sits on a steering wheel of the company's Corolla Touring vehicle during an unveiling event in Tokyo, Japan, on Tuesday, Sept. 17, 2019. Toyota launched a redesigned Corolla sedan and Corolla Touring wagon in Japan on Tuesday. , Bloomberg

(Bloomberg) -- Toyota Motor Corp. will break ground on its first battery factory in the U.S. at a mega-site in North Carolina, joining an industrywide push as automakers accelerate efforts to electrify their fleets.

The Japanese company will invest $1.29 billion in the automotive battery manufacturing facility, which is scheduled to start production in 2025, the company said Monday. It is the latest in a slew of announcements by major automakers in recent months to ramp up capacity to manufacture batteries for a coming wave of electric vehicles.

The plan to invest in the site on the outskirts of Greensboro, North Carolina, was previously reported by Bloomberg on November 19. It is expected to be done in partnership with Toyota’s joint battery venture with Panasonic Corp., a company called Prime Planet Energy & Solutions, people familiar with the matter said at the time.

Toyota would only say Monday that those two companies are current suppliers.

“Both PEVE and PPES remain as battery suppliers and important partners to the Toyota Group,” said a spokesman.

Toyota’s announcement follows its October pledge to invest $3.4 billion in automotive batteries in the U.S. over the next decade. That’s part of a larger 1.5 trillion yen ($13.3 billion) earmarked for battery development and production globally through 2030.

The company has hastened its push to electrify more of its lineup in recent months. Toyota promised last week to be ready to sell only zero-emission cars in Europe by 2035, aligning with the European Union’s green deal measures proposed earlier this year. it has been seen as a laggard in the U.S., but earlier this year announced plans for EVs.

Even so, Toyota forecasts higher demand in the U.S. for its gasoline-electric hybrid vehicles over the coming decade. By 2030, Toyota sees hybrids making up slightly more than half of the vehicles it sells in the U.S. Zero-emission EV and hydrogen-powered cars are estimated to claim 15% of sales, the automaker said in a briefing earlier this year.

Toyota’s push into EVs comes as rivals have made aggressive commitments to electrify their lineups and build out vehicle battery manufacturing infrastructure. President Joe Biden has challenged the industry in August to make half of all vehicles sold in the U.S. to be emissions-free by the end of the decade.

Ford Motor Co. and South Korea’s SK Innovation Co. said in September they will spend $11.4 billion on an EV assembly plant and trio of battery factories in Tennessee and Kentucky. Jeep maker Stellantis NV is planning a U.S. battery plant with Samsung SDI Co. General Motors Co., which plans 30 new EVs by 2025 globally, has said it will manufacture batteries in partnership with LG Chem at plants in Ohio and Tennessee, plus at two other unspecified sites.

Toyota’s battery factory will be the anchor tenant of an industrial park called the Greensboro-Randolph Mega-site, a 1,825-acre parcel of land in central North Carolina that has been rezoned for heavy industry. The plant will create around 1,750 new jobs there, the company said.

The state is offering $135 million in aid for investment in the Greensboro industrial park as part of a budget bill signed into law last month by Governor Roy Cooper. An additional $185 million in funding will be provided if the investment grows to $3 billion and increases the job creation to at least 3,875 eligible positions at the site.

Toyota had said last month it will initially spend around $1.3 billion in conjunction with its trading arm, Toyota Tsusho Corp., to develop land and build battery manufacturing facilities in the U.S.