The brick and mortar retail scene in Toronto is coming back to life.

Commercial real estate services firm CBRE says there’s been a “huge” increase in retail leasing and sales activity over the past two months as retailers see light at the end of the tunnel and prepare for the post-COVID era.

Data from CBRE show first-quarter sales of retail space in Toronto hit the highest level since 2019, with $181 million spent on storefronts.

“Retail is absolutely picking up again,” said Arlin Markowitz, executive vice-president of the urban retail team at CBRE, in a phone interview.

He added that many businesses are now opting for smaller locations to account for more activity shifting alone online.

“Retailers are definitely shrinking their footprints and figuring out ways to save on rental costs,” he said. “The shrinkage is happening in the stock room, not the floor.”

“Traditionally, a retailer would ‘waste’ 30 to 40 per cent of their square footage on a stock room. Today, we're seeing that shrink to 20 to 25 per cent and they're figuring out how to keep their goods in industrial facilities under an hour away from the city where they're selling,” he added. 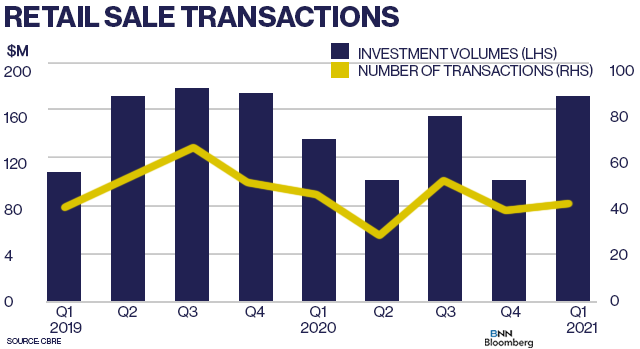 The latest data from Statistics Canada show commercial rental prices in Toronto fell 2.6 per cent in the fourth quarter as landlords offered rent support and concessions to entice business owners.

“I’m sure landlords don't like getting less rent than they were before, but I think it's bringing a lot more tenants back to the market now that it’s more affordable -- and more of them are seeing it as a bargain,” Markowitz said.

The Canadian retail market is also attracting some attention from abroad, with Markowitz saying CBRE is receiving calls from major brands located stateside and as far as London and Tokyo.

The brands are eager to open new locations in Canada, but he said strict travel rules are holding them back for the time being.

“I think the biggest impediment right now facing the fashion and luxury retail leasing sector is the quarantine,” he said. “I think there's going to be an explosion of new lease deals that occur as soon as our government opens things up a little bit to vaccinated travelers and makes quarantine rules a little less stringent.”