After languishing for months while Wall Street, by comparison, charged back to the office, Toronto’s financial district is finally starting to stir.

Many of Canada’s large financial firms say they have a growing portion of their workforces back in the office and the numbers are expected to swell in the New Year. Bank of Nova Scotia has said it will begin a phased return-to-office plan on Jan. 17 and Manulife Financial Corp. will reopen its Canadian offices Jan. 24. CI Financial Corp. is planning to bring its Canadian employees back in January as well.

On a recent weekday morning, a steady stream of mask-wearing commuters emerged from the city’s Union Station hub, checking their phones or plugging in ear-buds.

While still a far cry from the rush-hour din seen pre-pandemic, the downtown core is noticeably busier. Toronto Stock Exchange operator TMX Group Ltd. says about a fifth of its staff are back in its Canadian offices, up from about 4 per cent in the depths of the pandemic. Chief Executive Officer John McKenzie recalled a moment earlier this month that hearkened back to pre-pandemic times. As he was getting mic’d up for a live television interview, executives from Horizons ETFs held a boisterous in-person market-opening just a few feet away. He began his TV appearance on a floor littered with confetti.

“You’re starting to feel that life coming back into Bay Street,” McKenzie said. After months of virtual market openings, “doing it in person is quite a bit different.”

This time last year, Toronto was hunkered down in what would become one of the toughest lockdowns in North America. Many businesses remained closed for most of the first half of this year and not all will reopen.

But the success of Canada’s vaccination campaign -- which has inoculated 75 per cent of the population -- and the country’s continued adherence to masking and other safety measures has damped the spread of the Delta variant in Ontario, including in Toronto, the country’s financial hub. The province’s new case rate peaked over the summer at a seven-day average of about 750 cases out of a population of about 14.8 million. The average is currently hovering around 650, allowing many offices to open at a limited capacity.

That turned a tentative worker return to downtown towers, which began late in the summer, into a steady stream in September and October -- though still well below peak levels. 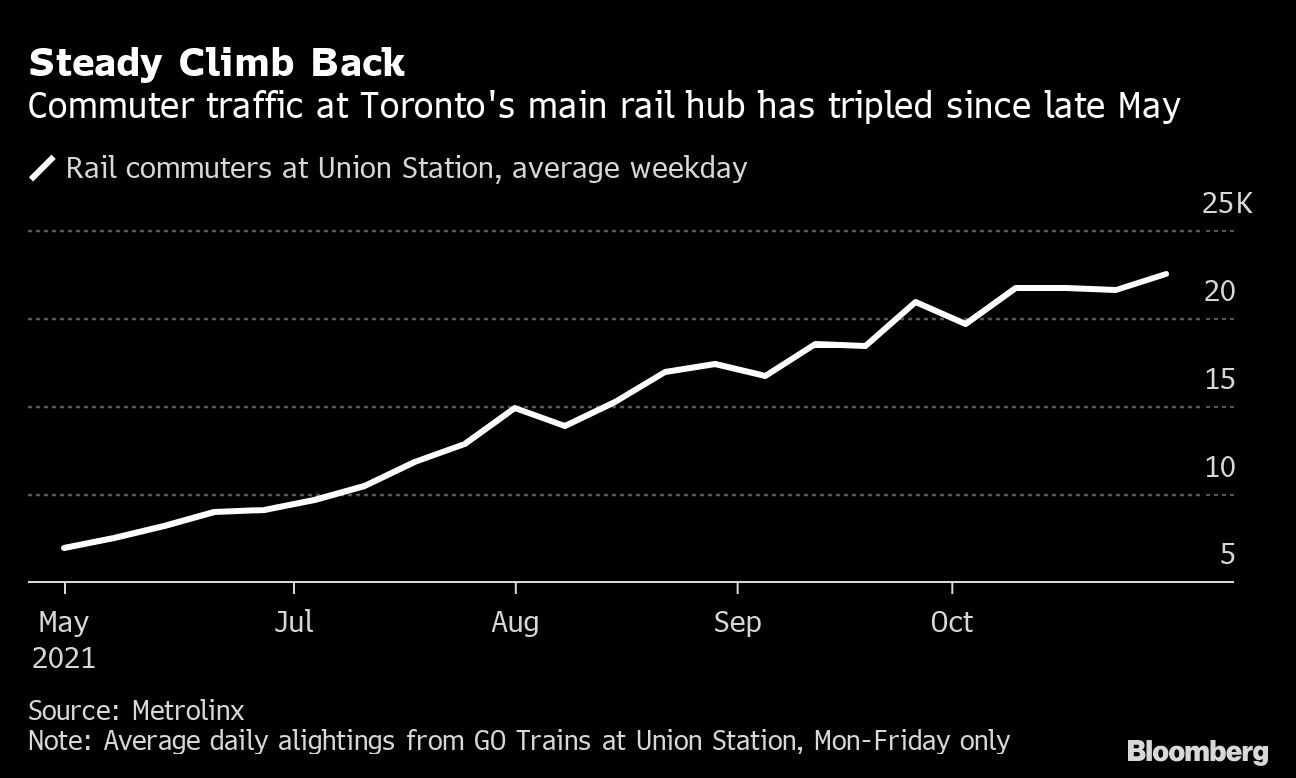 At National Bank of Canada, a 30 per cent cap on the number of workers allowed in the office at one time will be bumped to 50 per cent by the end of the month, said Danny Dery, vice president of employee experience. The bank, which is headquartered in Montreal but has significant operations in Toronto, is planning an even larger-scale return early next year. Right now, 15 per cent to 20 per cent of workers are voluntarily back in the office on any given day, he said.

Meanwhile, executives at Canaccord Genuity Group Inc. have been celebrating the fact that almost everyone is back in its largest Canadian offices in Toronto and Vancouver, said chief executive Dan Daviau.

The securities firm, which focuses on mid-market companies in Canada and the U.S., has been offering plenty of social lunches and free pizzas to stoke the back-to-the-office energy, he said. In recent weeks Daviau has visited every Canaccord office he could get into, catching up with employees and hosting town-hall meetings.

Canaccord also recently gathered its global management team for a strategy session in Florida and held its board meeting in person this month, the type of gatherings that just aren’t the same via video conference, Daviau said.

“It’s just way more efficient being in the office,” he said. “If your job is primarily interacting with people, certainly it’s good when you’re all in the same place. So it has worked out really well.”

All of this is starting to revive the downtown core where, on a recent morning, the underground PATH system once again smelled of coffee and toasted bread as an eight-person line formed at the Bagel Stop. Around the corner, barbers were snipping away at the Truefitt & Hill barbershop while, just steps away, the desk bell at the dry cleaners dinged as a customer dropped off a suit.

A large-scale return for the financial industry would be a lifeline for downtown merchants and service providers. Toronto’s finance sector accounts for about 14 per cent of the city’s GDP and is key to its economic development, said Jennifer Reynolds, CEO of Toronto Financial International, which promotes the sector.

In recent weeks, Reynolds said she’s suddenly started hearing from people who are thinking: “I want to go back to the office. I want to be in person. I want to see people.”

It may take the industry another year or longer to figure out how to bring people back, and make hybrid work effective, and keep employees happy and productive, she said. But it’s important to revive the water-cooler talk, the in-person training for young employees and the “meetings between the meetings” that drive creativity in the industry, she said.

“If we all stayed home forever and ever and ever, I think we would lose something,” she said.