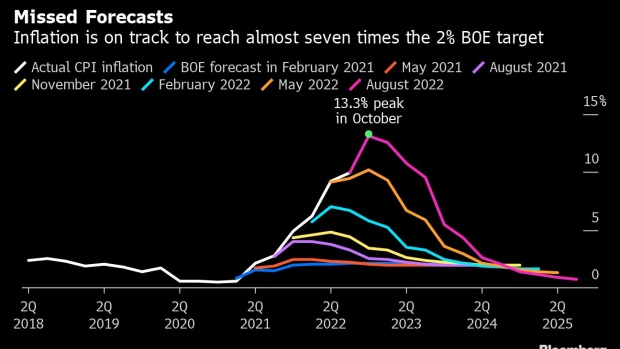 (Bloomberg) -- Replacing Boris Johnson was meant to let the UK’s ruling Conservatives move on from the chaos and distractions turning off voters.

Instead, a long leadership battle has exposed deep divisions in the ruling party and bolstered the sense of inertia at the heart of government. Senior Tories warn the combination of a “zombie” administration putting off decisions until Liz Truss or Rishi Sunak becomes prime minister on Sept. 6, as well as the vitriol between the rivals, is doing irreparable damage.

In a regular summer, with Parliament on recess and many Britons away on holiday, a policy vacuum would be unlikely to trigger alarms.

But times are not normal, with the economy battered by the pandemic, the implications of Brexit and Russia’s war in Ukraine that have stoked inflation and left Britons facing an unprecedented hit on living standards.

UK’s Next Prime Minister Will Inherit a Brutal Economic Storm

The bad news has been building. First the Bank of England said inflation would top 13% and predicted the UK would endure a recession lasting more than a year. Then came a forecast that average household energy bills would exceed £5,000 ($6,060) next year, and influential consumer finance commentator Martin Lewis warning of a “potential national financial cataclysm.”

“The scale of what’s coming down the road just doesn’t seem to be captured by the Conservative Party contest,” said Ben Houchen, Tory mayor of Tees Valley and a key figure in the party’s bid to hold onto the “red wall” areas of northern England it took from Labour in the 2019 election. “We are literally a zombie government, and there is a lot of nervousness in red wall communities and across the country at what they see as a black hole in terms of action.”

Along with other senior Tories, including cabinet ministers and government officials, Houchen is worried that a toxic leadership contest and inaction on the cost of living is entrenching a narrative that the party is out of touch.

In many ways, the problem stems from how Johnson’s demise played out. Rather than stepping down immediately with a formal caretaker put in place, the prime minister is staying on until his successor is appointed -- but agreed that his administration would not make any major fiscal decisions.

At the time, Johnson’s critics regarded that as an acceptable compromise that would prevent the government doing anything controversial that the next prime minister would be forced to own or discard. But one minister, speaking on condition of anonymity, expressed frustration that it effectively tied the government’s hands on tackling the cost-of-living crisis.

Johnson’s own approach to this interim period has not helped. His absence from the public eye, including a long-delayed honeymoon, has been so noticeable that his mere appearance at a meeting with energy companies on Thursday made at least one newspaper front page -- along with the fact no agreement was reached on how to lower soaring household bills.

According to one government official, Johnson is not the only one absent from the job. Several permanent secretaries of the civil service -- senior officials who serve the government of the day -- were on holiday when some of the dire economic forecasts were dropping, the person said, adding that parts of the UK bureaucracy were suffering a collective breakdown akin to the first weeks of March 2020 when Covid-19 cases were rising.

On Friday, Chancellor of the Exchequer Nadhim Zahawi insisted his Treasury is working up options for the incoming premier to tackle the cost-of-living crisis, telling Sky News the new leader would be able to “hit the ground running.”

But that is still weeks away, and there’s growing concern about how much damage the Truss and Sunak campaigns can do in the meantime. Even former cabinet minister Penny Mordaunt, who was knocked out of the leadership contest and now backs Truss, said both sides must stop what she described as “derogatory” blue-on-blue attacks.

“The most important thing is for a new government to let people know how it will help them with the cost of living, especially serving debt, fuel and energy bills. The clear communications needed to reassure will not be helped by derogatory comments made during this contest. Those tempted to resort to this need to break out of the contest bubble and start to think about the public we serve and the future”

One senior Truss-supporting minister accused Sunak, the former chancellor whose resignation helped bring Johnson down, of running a kamikaze campaign that would trash the Tories’ long-term brand if he loses, as polls predict.

In turn, Truss’s campaign accused Sunak of pursuing “socialist tax and spend” and likened his plan to former Labour Prime Minister Gordon Brown’s policies. In their attempt to win the leadership debate over economic policy, both candidates have trashed elements of Conservative policy over the past 12 years in power.

The animosity between the two camps is so bad that allies of Truss are urging her to block Sunak, Raab and other vocal critics from her cabinet if she wins. Truss should offer Sunak only a junior role that he would be unlikely to accept, thereby encouraging him to leave politics, one prominent supporter said. Still, Sunak has said he would serve a Truss government in any capacity.Meanwhile, Robert Buckland became the first cabinet minister to publicly switch endorsements for the Tory leadership from Sunak to Truss, the Telegraph reported Saturday.

The Truss-supporting minister said the contest has become too long and drawn-out, to the point that no Tory is benefiting. Another Truss-backing MP accused the Sunak campaign of desperation and called on colleagues to stop publicly attacking each other on broadcast media rounds.

Yet another Truss supporter said there was fault on both sides, arguing the Sunak campaign was causing terrible damage to the party but that Nadine Dorries, a vocal Sunak critic, was also wrong to share an image of him portrayed as a backstabber over his part in Johnson’s downfall.

“Everybody involved in this leadership campaign has got to remember that at the end of this we have to come together,” said Andrew Bowie, a Scottish Tory MP and Sunak supporter. “The enemy that we’re fighting is Keir Starmer’s Labour Party and Nicola Sturgeon’s Scottish National Party, and we’ve got to stop gifting them lines of attack.”

To be sure, there are politicians in Starmer’s party who think Labour has also gone missing over the cost-of-living crisis. But with the government’s approval rating languishing at about 20%, according to YouGov, there’s also an argument for opposition parties to sit back and let the Tories attack each other.

Meanwhile, Houchen -- who supports Sunak -- is calling for the new prime minister to put the government on a war footing over the cost of living, with pandemic-style daily press conferences and a huge economic package comparable to the furlough program to prevent households from going under.

“The risk is there are weeks before then when all people see is that the government isn’t able to get a grip,” he said. “In the outside world, people are asking what conversation the Conservatives are having, because that’s not the conversation they want to be having on the cost of living.”