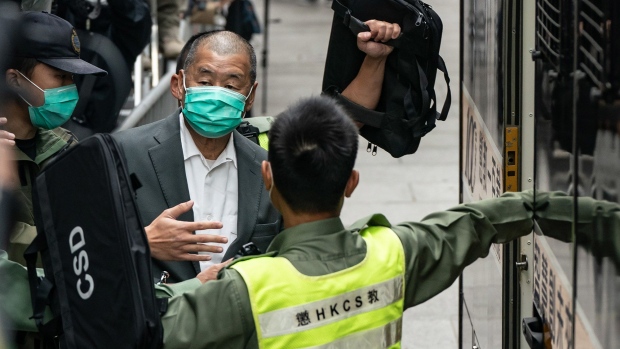 The Department of Justice sought to ban overseas lawyers from taking part in national security cases apart from in exceptional cases, after losing in its bid to block Timothy Owen from representing Lai in lower courts. Lai is charged with collusion with foreign forces and sedition in a trial that starts Thursday.

The court’s decision to allow Owen to defend Lai could prompt Beijing to intervene. China’s top legislative body would need to interpret the law if overseas lawyers were allowed to take part in national security cases, Tam Yiu-Chung, Hong Kong’s sole delegate to the National People’s Congress, said on Sunday.

The Department of Justice had raised “undefined and unsubstantiated issues” that hadn’t been mentioned in earlier appeals, according to Monday’s ruling. There is no “appropriate basis” to approve the government’s request, the three judges led by Chief Justice Andrew Cheung said, while reaffirming the courts’ commitment to enforcing national security.

Shortly after the ruling, Hong Kong leader John Lee called a press conference for 6:45 p.m. local time. No details were given in the government statement.

The central government may allow Lai to be tried on the mainland if Hong Kong can’t successfully implement the national security law as required, Willy Fu, a member of the Chinese Association of Hong Kong and Macau Studies, told Beijing-controlled local newspaper Ta Kung Pao.

Lai has emerged as a key target by authorities in their campaign against dissent following the enactment of the security law. He was among the earliest activists to face security charges and has already been serving a 20-month sentence for taking part in unauthorized assemblies relating to the 2019 protest movement. Lai is the founder of the now-shuttered Apple Daily newspaper.

Thw outcome of the trial is likely to shape how Hong Kong handles future prosecution of cases under the national security law, which is based on the Chinese civil law system but is being implemented by the city’s British-based common law system. Beijing’s security law contains several provisions that lawyers argue undercut Hong Kong’s common law traditions including giving the government power to select judges, transfer cases to the mainland and withhold bail.