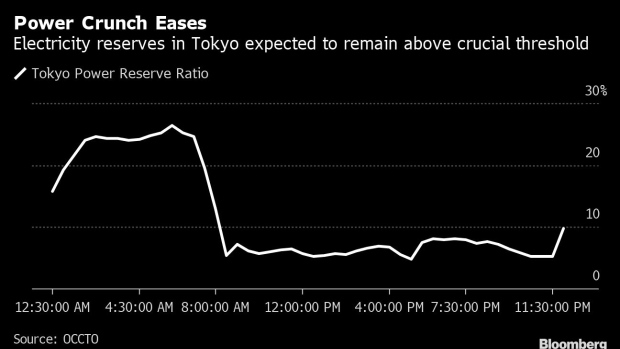 (Bloomberg) -- Tokyo’s power crunch showed signs of easing on Tuesday, while Japan’s government renewed a call for residents to conserve electricity as more hot weather is expected this week.

Even though electricity supply in the capital isn’t expected to be as tight as Monday, the country’s government extended an advisory for Tokyo that calls for households and businesses to curb consumption. Temperatures aren’t forecast to be as hot as the previous day, providing relief for utilities.

Electricity demand in the capital surged on Monday due to hot weather, with the government warning of “very tight” supply. The situation improved after other regional utilities shared power to Tokyo and businesses moved to cut back consumption.

Japan’s latest power crunch comes amid expectations of a long summer of pressure on electricity networks across much of Asia, with blistering heat seen raising demand just as global fuel shortages limit supply. While hotter weather later this week is expected to stretch Tokyo’s grid, it’s unlikely the capital will face blackouts as generation in the rest of the country is strong.

Japan recently introduced a new system to warn people to prepare for potential power crunches. Under the new methodology, the government issues a supply advisory a day before if electricity reserve ratios are expected to drop below 5% and will ramp it up to an alert if that figure is seen slipping under 3%, the minimum level necessary for a stable grid.

The power reserve ratio across Japan is expected to stay above at least 4% on Tuesday, according to data from the grid’s coordinator.