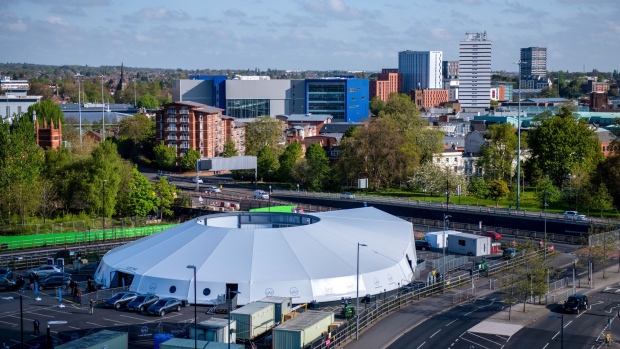 A model of a Supernal Electric Air Vehicle (eVtol) on display inside the Air-One vertiport in Coventry, April 25. Photographer: Chris J. Ratcliffe/Bloomberg , Bloomberg

Coventry has seen better days. Once known as Britain’s motor city, the settlement of about 400,000 people in England’s Midlands has been left struggling for an identity by decades of slumping auto output that followed widespread destruction from World War II bombing.

This spring, however, Coventry is once again at the forefront of world-leading innovation in personal mobility as it hosts what’s billed as the first-ever fully functional hub for flying taxis, the electric-powered vertical takeoff and landing craft that backers are talking up as the biggest new thing in aviation.

The site is fully functional, that is, apart from the air taxis themselves. With the scores of proposed eVTOL models yet to win regulatory signoff, unmanned drones are standing in for the typically five-person craft during three weeks of demonstration flights in Coventry.

Everything else, though, is just as it will be when the first flying cabs come to market in a few years’ time, according to the hub’s developer, Urban-Air Port Ltd., a London-based startup that’s leading the push to develop so-called vertiports in competition with UK rival Skyports Ltd.

“We’re here to show everyone what the future is going to look like,” Urban-Air Port founder and executive chairman Ricky Sandhu said in an interview. “There’s no point having new technology if people don’t believe in it.”

The hub, on a car parking lot at a busy junction across the road from Coventry’s main railway station, makes no concessions to the futuristic glamor of Jetsons-style travel, while the city itself is emblematic of Britain’s former industrial centers, seeking to reinvent itself yet increasingly held back by limited or overcrowded transport links.

“Coventry isn’t London, and that’s important,” Sandhu said. “London is well served by public transport. Coventry and many other cities are not.”

Surrounding the hub are charging points for electric cars and scooters intended to allow passengers to switch seamlessly from one mode of travel to another.

The overall message is clear. Flying taxis aren’t some exotic adventure, but a workaday solution to decarbonizing inter-city travel that will be within reach of many, costing much the same as an airport limousine. Hub construction will also be affordable, Sandhu says, starting at 5 million pounds ($6.1 million).

The Coventry base is built to a doughnut-shaped design that Urban-Air Port reckons will be most efficient in city settings, featuring a central helicopter-style landing pad surrounded by an outer ring housing check-in facilities, a pre-departure lounge and cafe.

The whole thing is only 150 feet (46 meters) across, partly to fit into crowded city centers, but also because the time between a passenger arriving and boarding a flight is intended to be just 20 minutes. That requires a minimal waiting area, more comparable to a busy cabstand than an airport security queue.

And there’s no room for the rows of shops that cram most airport terminals. Instead, the hubs will feature a small number of high-end retailers — clothing brands Anatomie and Paul & Shark and Italian wine producer Bottega SpA are on show in Coventry — plus advertising screens promoting online purchases.

When their flights are ready, passengers simply walk a few meters to the waiting craft, visible through ceiling-high glass walls at the center of the vertiport. Once they’ve boarded, the pad elevates until it’s level with the top of the building, allowing the eVTOL to rise into the air and head off to its destination.

Airlines have placed orders for hundreds of the battery-powered craft, which have been exhibited at air shows. While they're mostly intended for short journeys, some can fly more than 100 miles.

Read more: No, Really, Flying Taxis Are Getting Closer to Giving You Rides

Urban-Air Port aims to build 200 hubs over the next five years and is offering five different designs: the Air One passenger base on show in Coventry; a floating Marine One version; Resilience One, which can be quickly assembled to provide disaster relief; City Box, for cargo carriage; and Docks Box, designed to attach to loading bays at warehouses and logistics centers.

The firm says it’s engaged in 65 active programs around the world with real-estate developers, city authorities, airports, business hubs, science parks, tourism ventures and government planners. It holds letters of intent and pre-orders for 13 vertiports worth about 60 million pounds.

The company also has reserves for development as equity fundraising approaches 20 million pounds from investors including South Korea’s Hyundai, the world’s fourth-largest carmaker and developer of the Supernal SA-1 eVTOL, a full-scale model of which is on display in Coventry.

The project is also backed by the city’s council and government-funded UK Research and Innovation.

Britain is not only a world leader in eVTOL hubs but a major player in developing the craft, with Bristol, England-based Vertical Aerospace Ltd. leading a crowded global field with more than 1,300 provisional orders won.

Virgin Atlantic Airways Ltd., which has signed for 150 of Vertical’s VX4 craft, says the UK’s compact geography and large number of major towns and cities, combined with crowded roads, make it an ideal testbed for the new technology.

In addition to gaining public acceptance, something the Coventry experiment is designed to help address, flying taxis must win certification from aviation regulators. That could prove challenging given how different eVTOLs are from most earlier craft.

Integrating air taxis into aviation networks presents another hurdle. They could initially operate under visual flight rules as helicopters do now, and navigate using physical landmarks, but scenarios involving hundreds of craft touching down in locations across a city would require far more complex control systems.

More than 10,000 ticket-only visitors have so far explored the Coventry hub since it opened on April 25, with thousands more craning their necks to watch the double-bed-sized Malloy Aeronautics T150 drone climb above the city.

Under special dispensation from the UK Civil Aviation Authority, it’s the first time an unmanned craft of its size has ever flown in such a built up environment. Sandhu says feedback has been overwhelmingly positive.

The public response has been “tremendous,” with people generally enthused by the project and even some skeptics won over, says Sandhu, citing a man employed in the local auto industry who attended with his son.

“He was initially very negative,'' Sandhu says. “But after half an hour of looking around and watching a flight he’d completely changed his mind. He came in a naysayer and left a convert. These are the people we need to convince.”