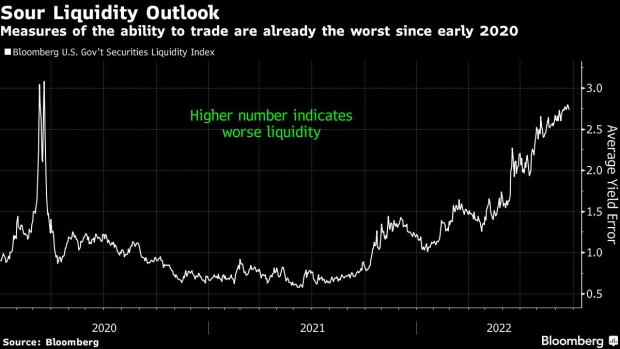 Jerome Powell, chairman of the US Federal Reserve, during a Fed Listens event in Washington, D.C., US, on Friday, Sept. 23, 2022. Federal Reserve officials this week gave their clearest signal yet that they're willing to tolerate a recession as the necessary trade-off for regaining control of inflation. , Bloomberg

(Bloomberg) -- Week by week, the bond-market crash just keeps getting worse and there’s no clear end in sight.

With central banks worldwide aggressively ratcheting up interest rates in the face of stubbornly high inflation, prices are tumbling as traders race to catch up. And with that has come a grim parade of superlatives on how bad it has become.

On Friday, the UK’s five-year bonds tumbled by the most since at least 1992 after the government rolled out a massive tax-cut plan that may only strengthen the Bank of England’s hand. Two-year US Treasuries are in the middle of the the longest losing streak since at least 1976, dropping for 12 straight days. Worldwide, Bank of America Corp. strategists said government bond markets are on course for the worst year since 1949, when Europe was rebuilding from the ruins of World War Two.

The escalating losses reflect how far the Federal Reserve and other central banks have shifted away from the monetary policies of the pandemic, when they held rates near zero to keep their economies going. The reversal has exerted a major drag on everything from stock prices to oil as investors brace for an economic slowdown.

“Bottom line, all those years of central bank interest-rate suppression -- poof, gone,” said Peter Boockvar, chief investment officer at Bleakley Advisory Group. “These bonds are trading like emerging market bonds, and the biggest financial bubble in the history of bubbles, that of sovereign bonds, continues to deflate.”

The latest leg downward was fueled by the Fed meeting Wednesday, when the central bank raised its policy-rate range to 3% to 3.25%, its third straight 75-basis-point hike. Policy makers indicated they expect to push the rate beyond 4.5% and keep it there, even if it exacts a large toll on the economy.

Underscoring that point, Fed Chair Jerome Powell said the bank “is strongly resolved to bring inflation down to 2%, and we will keep at it until the job is done.” The broad inflation gauge that the Fed targets, the personal consumption expenditures price index, is expected to show a 6% annual increase in August when it’s released on Sept. 30.

The scale of the expected interest-rate hikes will likely only deepen the Treasury market’s losses, since in previous monetary-policy tightening cycles yields have tended to crest near the Fed’s target rate.

For now, only policy-sensitive front-end Treasuries are trading at yields above 4%, with the five-year briefly breaching that mark on Friday. Longer-dated yields are lagging the rise as traders price in the risk of a recession. Still, the 10-year hit as much as 3.82% Friday, a 12-year high.

“With more Fed rate hiking coming and quantitative tightening, as well as the possibly more government debt issuance down the road amid less Treasury buyers out there now, it all just means higher rates,” said Glen Capelo, managing director at Mischler Financial. “The 10-year yield is definitely going to get closer to 4%.”

In the coming week, the market may face fresh volatility from the release of the inflation data and public speaking engagements by Fed officials including Vice Chair Lael Brainard and New York Fed President John Williams. Also, the sale of new two-, five- and seven-year Treasuries will likely spur trading volatility in those benchmarks, since the market typically seeks a price concession before the auctions. The week will also mark the end of the month and the quarter, usually a time of diminished liquidity and elevated volatility as money managers adjust holdings.

A broad Treasury index has been swamped by escalating losses and is heading for a drop of over 2.7% in September, its worst since April. It’s down over 12% this year.

“Whether 4.6% is the peak rate or they have to go further depends on the inflation trend,” said Andrzej Skiba, head of the BlueBay US fixed-income team at RBC Global Asset Management, who is cautious about being exposed to longer-dated interest-rate risk. “The market is totally at the mercy of incoming inflation data, and while our view is that inflation will decline, the degree of confidence in that forecast is low.”