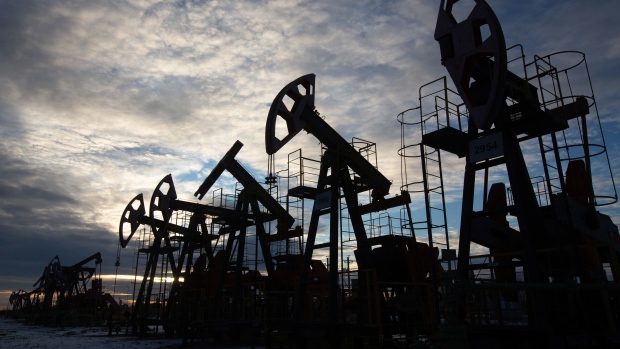 Oil pumping jacks, also known as "nodding donkeys", in an oilfield near Neftekamsk, in the Republic of Bashkortostan, Russia, on Thursday, Nov. 19, 2020. The flaring coronavirus outbreak will be a key issue for OPEC+ when it meets at the end of the month to decide on whether to delay a planned easing of cuts early next year. Photographer: Andrey Rudakov/Bloomberg , Bloomberg

The price of West Texas Intermediate crude spiked as much as 4.8 per cent this morning on hope for a big production cut when OPEC+ meets in Vienna this week. Our Bloomberg News partners are reporting the cartel and its allies will consider slashing their collective output quota more than one million barrels per day at the Wednesday meeting. This is with WTI down about one-third since the March peak as central banks’ rate hikes fuel recession fears.

This is easily the most uncomfortable story that’s percolating. Credit Suisse shares sank to an all-time low this morning in a set of circumstances that, for some, are evoking memories of 2008-2009. Its chief executive has been attempting to assuage fears about its capital levels, while acknowledging the bank is at a “critical moment.” Beyond its collapsing share price, market apprehension is also evident in the pricing of credit default swaps. The big question right now might be whether Credit Suisse can afford to wait until Oct. 27 to present its restructuring plan.

So much for the United Kingdom’s plan to cut taxes on its highest earners. “It is clear that the abolition of the 45 per cent tax rate has become a distraction,” Chancellor Kwasi Kwarteng said via Twitter today as he announced the about-face. Knee-jerk relief can be seen in the currency market, where the British pound at one point was up a full cent against the U.S. dollar before paring gains. The rest of the chancellor’s sweeping tax overhaul (ie, the one that sparked market turmoil and prompted the Bank of England’s intervention) remains in place.

MNP is out with its quarterly consumer debt index. If you’re the glass half-full type, there might be some comfort in seeing a six-point drop in the proportion of respondents saying they’re within $200 of insolvency. If you’re not that type, you’ll see that still almost half of respondents describe themselves as being on the cusp of not being able to pay all their bills. And you might also be alarmed by the survey’s suggestion that Canadians aged 18-34 have seen their average month-end cash balances plummet $273 (to $606) compared to the prior quarter.

Al Monaco is retiring from Enbridge at the start of next year, the pipeline operator announced this morning while naming Greg Ebel, its current chair, as his successor. We’ll take this opportunity to reflect on Monaco’s term since he took over from Pat Daniel in 2012, and to evaluate the challenges and opportunities ahead for Ebel.