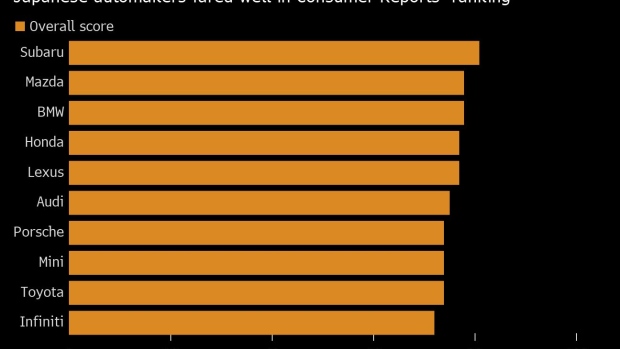 Tesla Inc. vehicles in a parking lot after arriving at a port in Yokohama, Japan, on Monday, Feb. 14, 2022. Japan is scheduled to release trade balance figures on Feb. 17. , Bloomberg

The electric-car maker placed No. 23 out of 32 brands on the 2021 list, down seven spots from the year before, Consumer Reports said Thursday. Tesla’s Model 3 was also beaten out as the “top pick” for 2022 in the electric-vehicle category by Ford Motor Co.’s Mustang Mach-E.

U.S. manufacturers fared poorly on the list, with none ranking in the top 10. At No. 11, General Motors Co.’s Buick was the best domestic brand, while GMC and Stellantis NV’s Jeep took the last spots. Subaru Corp. eclipsed Mazda Motor Corp. to take the 2021 crown, and Japanese automakers occupied four of the top five spots.

The new list is a blow to Tesla, which has been dogged by questions over build quality and reliability even as the company’s market value has soared to roughly $1 trillion. Chief Executive Officer Elon Musk has lamented the difficulty in getting all the details right while ramping up production.

The Austin, Texas-based company suffered in the rankings in part because of changes to its Model S sedan, Jake Fisher, senior director of automotive testing at Consumer Reports, said in an interview. Tesla switched its steering wheel to a yoke design that Fisher said is a “chore” and “just does not work very well.”

Also, the placement of the turn signal and horn buttons on the yoke can lead to errant presses, while a lack of traditional gear selector “makes driving frustrating,” he said. The Model X had similar design changes.

Tesla, which doesn’t have a public relations department, didn’t respond to an emailed request for comment.

The Model 3 remains the only Tesla vehicle that Consumer Reports recommends, as the Model Y struggles with persistent reliability issues despite its popularity, Fisher said. “Everything from the rear hatch not closing, to trim pieces falling off, to electrical problems.”

Ford’s Mustang Mach-E unseated the Model 3 in the EV category, which Fisher said was in part because the sport utility vehicle is “a little bit easier to live with.” The Mach-E also has a driver monitoring system that uses eye tracking to make sure drivers are paying attention to the road when using Ford’s upcoming advanced driver assistance software, BlueCruise -- something Tesla doesn’t have in place with its Autopilot system.