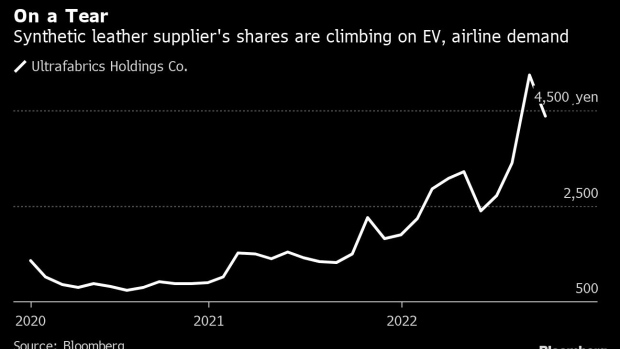 The goal for Noboru Yoshimura, 60, president of the Tokyo-based manufacturer, is to make the company’s name synonymous with synthetic leather. “More and more people are using our leather,” he said in an interview. “We’re consciously developing premium products, and that strategy is in line with the times.”

For years, leather made from processed cowhides or sheepskin was seen as a premium option for car buyers. Now, environmentally conscious consumers are seeking out products that don’t involve the slaughter of animals, such as plant-based meat. Airlines are turning to the leather-like material to take advantage of their lower weight to save on fuel and reduce carbon emissions. As a result, the global synthetic leather market is on track to reach $67.2 billion by 2030, according to Straits Research.

Investors appear to agree on the opportunity for Ultrafabrics, which hasn’t fully disclosed its list of customers and declined to comment. Cleantechnica last year reported that Ultrafabrics is a Tesla supplier, citing a Tesla Owners Group. Ultrafabrics lists United Airlines, among other airlines, as their client.

After a brutal year in 2020, when the pandemic wreaked havoc on the global auto industry, the company’s stock has quintupled as sales and profitability recovered. Ultrafabrics is forecasting operating profit of 2.7 billion yen ($18.7 million) on sales of 18.6 billion yen for the fiscal year through March, while analysts, on average, are projecting profit of 3 billion yen and 19 billion yen in revenue.

In its previous incarnation, Ultrafabrics was Daiichi Kasei, a materials supplier that created a material that is strong, resilient and lightweight, while soft like genuine leather. Four layers are weaved together to create a leather-like texture, combining a back cloth, a form, cushion layer and a final protective film.

While vegan leather may appeal to consumers and help reduce weight penalties for airlines, the majority of the material is made from plastic-based polyurethane chloride and polyurethane, raising questions whether production and disposal is good for the environment. Some variants using cork, bark, or apple peel, do exist.

After merging in 2017 with US-based Ultrafabrics, the combined entity changed its name and kept its listing in Japan. The legacy operations of Daiichi Kasei are the manufacturing backbone, while what was originally Ultrafabrics oversees marketing and sales.

Electric vehicles are a key driver of growth, because many environmentally conscious buyers tend to be concerned about the use of animal products in cars. Responding to calls to make their vehicles “all vegan,” Tesla has been using synthetic leather since 2016. Other companies are following suit by including the material among seating options, seen in the new Range Rover SV.

“EV makers like Tesla are increasing their use of synthetic leather,” said Katsuhiko Ishibashi, an analyst at Ichiyoshi Research Institute Inc. “Ultrafabrics is also increasing its shipments to EV makers.”

When Yoshimura goes outside of Japan to promote Ultrafabric’s products, “the first question they ask me is what is your sustainability story?” he said at a recent lecture at International Christian University on the outskirts of Tokyo. The challenge is in taking a product that resonates with socially and environmentally conscious consumers and building a profitable business off of that.

China and Japan are the markets where that hurdle is most evident, and are seeing less expansion in synthetic leather products, according to Yoshimura. While consumers in the US and Europe are embracing alternative materials, “only Japan and China think that genuine leather should be available as a premium option,” he said.

“That’s why I feel a great sense of urgency,” Yoshimura said. “There’s still a sense that sustainability is a premium option, but it will probably become a must-have in the not-too-distant future.”

(Corrects headline to remove reference to Tesla; adds attribution in fourth paragraph. A previous version of this article corrected the year of merger.)