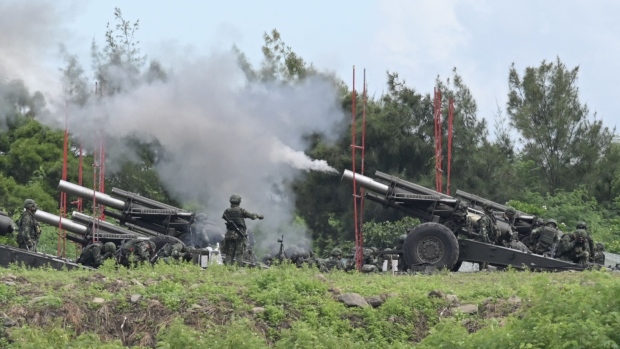 (Bloomberg) -- China used US House Speaker Nancy Pelosi’s visit to Taipei as a pretext to prepare for a possible Taiwan invasion and expand its control throughout the region, the island’s foreign minister said, adding Beijing had been planning the move for some time.

China’s recent military drills in the seas and air around Taiwan were aimed at changing the status quo in the Strait, Joseph Wu said at a briefing in Taipei on Tuesday, adding that the activity fueled concern Beijing may proceed with an actual invasion.

China’s ambitions don’t stop at Taiwan, Wu warned. Beijing is determined to exert control over the East and South China seas at either end of the Taiwan Strait, making the whole area its internal waters, he added.

Chinese Foreign Ministry Spokesman Wang Wenbin called the ongoing drills a “warning to the provocateur,” at a news briefing in Beijing on Tuesday, in a veiled reference to the US which China blames for inflaming current tensions. He declined to say whether such military exercises near Taiwan were a “new normal.”

China sent more than 120 aircraft across the median line from Wednesday to Sunday. Taiwan responded by deploying aircraft and vessels, issuing radio warnings and deploying land-based missile systems to monitor the activities.

The Taiwanese Defense Ministry said it detected 45 Chinese warplanes and 10 warships around the island through 5:00 p.m. Tuesday, with 16 PLA jets having flown through the median line of the Taiwan Strait.

China’s military for the second day running announced new exercises near Taiwan on Tuesday, as Beijing keeps up pressure on the island past an initial set of provocative drills in the wake of Pelosi’s visit. Beijing denounced her trip as a violation of the US’s pledge 50 years ago not to formally recognize the government of Taiwan, which China claims as its territory.

Reiterating the government’s stance that Taiwan and China are separate jurisdictions with neither subordinate to the other, Wu said China’s military actions violated the island’s rights under international law, but that Taipei would remain calm. He added that most people in Taiwan supported the trip by Pelosi, the first sitting House speaker in about 25 years to visit the island.

Taiwan proceeded with a live-fire artillery drill Tuesday simulating a defense against a Chinese invasion.

The drills, which took place for about an hour in Pingtung County in the south of the island, simulated a defense against an attack from a People’s Liberation Army convoy on the beach, according to a spokesman from Taiwan’s Army. The spokesman said the drills weren’t related to the recent Chinese military exercises, calling them routine.

(Updates with China’s military incursions near Taiwan in paragraph 8.)