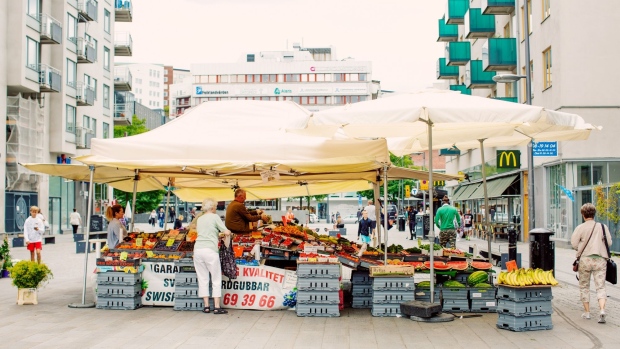 Customers buy fresh fruit and vegetables from a market stall in the center of Stockholm, Sweden, on Thursday, Aug. 6, 2020. Sweden was unable to escape its worst economic contraction ever despite adopting one of Europe’s softest approaches to the Covid-19 pandemic. Photographer: Erika Gerdemark/Bloomberg , Bloomberg

(Bloomberg) -- Sweden’s underlying inflation surged to a new three-decade high, keeping the pressure on the country’s central bank to ramp up policy tightening next month even as the largest Nordic nation faces a recession.

The Riksbank’s target measure, CPIF, rose 8% from a year earlier in July, the first slowdown since January, according to data released by Statistics Sweden. But with energy excluded, consumer price growth jumped to the highest level since December 1991, matching the 6.6% median from a Bloomberg survey of economists and clearly above the Riksbank estimate of 5.8%.

The data spurred some economists to revise higher their forecasts for the Swedish central bank’s policy rate path, with most seeing the Riksbank raising borrowing costs by three quarters of a percentage point in September to 1.5%. Such increases would align the policy makers in Stockholm with their peers in the rich world and continue a drastic pivot for what was once one of the most cautious views globally on scaling back stimulus.

“The July CPI report shows the gap between underlying inflation signals and the Riksbank’s forecasts widening further,” Svenska Handelsbanken’s economist Johan Lof said in a note to clients, raising his forecast for the September hike to 75 basis points. “We judge that this forecast error and, first and foremost, the current inflation outlook and risks will make the Riksbank tighten policy faster than it has so far communicated.”

His colleague at Nordea, Torbjorn Isaksson, forecast the Riksbank to follow up the 75 basis point hike in September with a half-point increase in November.

The krona, which has been the second-weakest performer among the G10 group of major currencies this year, declined following the announcement, trading 0.3% lower at 10.4107 at 09:58 a.m. in Stockholm.

Friday’s data marks the tenth straight month of consumer price growth surpassing the Riksbank’s forecast. Governor Stefan Ingves said last month that the bank has had a “bad year” as a forecaster.

The Swedish economy was among the best in weathering the fallout from the pandemic and has limited exposure to effects of Russia’s war in Ukraine, yet a surge in energy prices and other costs is now denting the consumer sentiment, while the housing market is cooling rapidly. The outlook has worsened during the summer, with a recession looming next year, the National Institute of Economic Research forecast on Wednesday.