This was the week when supply-chain angst finally landed on media stocks while inflation sirens blared in commodities even as the pace of economic growth showed signs of cooling.

But if you were looking for evidence stock investors were perturbed, there wasn’t much.

While supply-chain and labor-market snarls have been tormenting investors for much of the year and are far from solved, they remain - for now - the tolerable downside of trends that investors are happy to celebrate: robust demand in a reopening economy. Throw in an earnings season showing that damage to profit margins remains light, and it explains why shares are up 5 per cent in October, a month skeptics had circled as a tough one.

“Corporates are left and right telling us that end demand is really strong and global growth is accelerating. I think that’s pretty clear,” Evan Brown, head of asset allocation at UBS Asset Management, said in an interview on Bloomberg’s “Surveillance.” As for inflation, “the markets are adjusting, but the growth dynamic is so strong that I think we can get through that.” 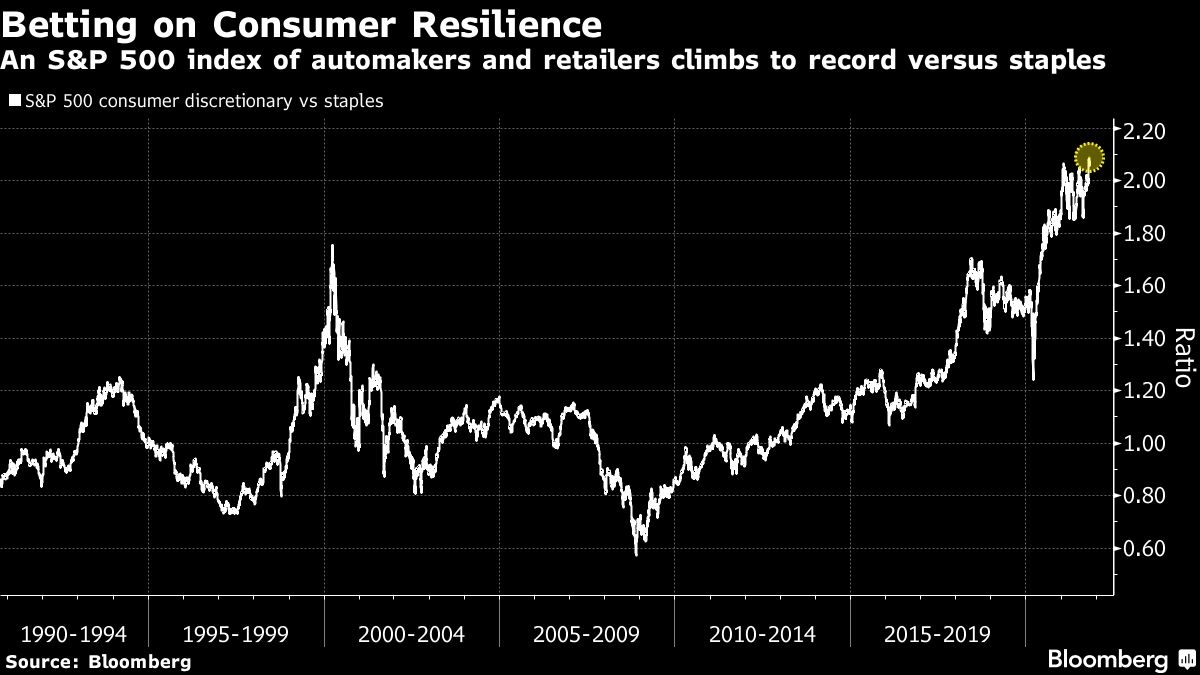 Up four of five sessions, the S&P 500 gained 1.65 per cent and reached its first record since the start of September, while the Dow Jones Industrial Average rose 1.1 per cent. Warnings about potential ad-spend issues for social-media giants knocked the Nasdaq 100 down Friday but couldn’t keep it from gaining 1.4 per cent on the week.

There was no shortage of worrisome headlines to spook investors. China’s economy slowed in the third quarter, while in the U.S., manufacturing and the housing market cooled. Oil posted the longest stretch of weekly advances since 2015 and everything from natural gas to wheat climbed, adding to inflationary pressure that prompted the bond market to price in higher odds of a rate hike by June 2022.

Even social media, normally a sturdy patch, was contending with some of the recent angst. Snap Inc. said supply-chain bottlenecks are prompting companies to hold back on online ad spend for the upcoming holiday season, sparking a wave of selling in ad-dependent stocks like Facebook Inc., which reports results Monday.

Still, next to the dour drumbeat has been a chorus of business leaders who say consumers are staying resilient. American Express Co. said Friday that a measure of credit-card spending reached a record in the third quarter. That followed similarly strong card usage numbers from major banks.

And investors seemed to be willing to bet on a spending spree in coming quarters. While automakers and retailers are expected to report a drop in third-quarter profits, their shares are up at least 5 per cent since this earnings season began, ranking among the top-performing industries in the S&P 500. As a result, the index tracking consumer-discretionary shares climbed to an all-time high against makers of consumer staples like soap and toilet paper.

“U.S. consumers are starting to open up their wallets a bit and spend some more - that bodes well going into the holiday season,” Matt Forester, chief investment officer of Lockwood Advisors at BNY Mellon Pershing, said by phone. “That’s certainly good for the stock market.”

As chaotic as it all looked, from supply-chain disruptions to a lack of workers, companies appeared to have handled it well. Mattel Inc., known for its Barbie and Fisher-Price toys, this week raised its full-year guidance, saying that it’s working through its supply bottlenecks.

Chipotle Mexican Grill Inc.’s sales topped analysts’ estimates as the restaurant chain benefited from price increases and digital ordering. Its labor costs accounted for roughly 26 per cent of revenue in its latest quarter, less than the pre-pandemic levels in 2019, according to Bespoke Investment Group.

More than 82 per cent of firms that reported have beaten analysts’ profit estimates, a frequency of positive surprises that before the pandemic was never seen in Bloomberg data going back to 1993.

Robust results have forced Wall Street forecasters to drop their cautious outlook for the coming years. After slashing their numbers during September, analysts are now ratcheting up estimates. Their estimates for S&P 500 earnings now stand at US$217.70 a share and US$238.10 a share for 2022 and 2023, respectively. Each target represents year-over-year growth of around 9 per cent, data compiled by Bloomberg Intelligence show.

Corporate earnings again proved to be a share-price booster, helping the S&P 500 fully recover from its worst monthly selloff since the market’s pandemic-trough in March 2020. Since banks began reporting third-quarter results, the benchmark index has climbed more than 4 per cent. That’s the best performance at this point of a cycle in seven years.

Against the backdrop, investors are warming up to stocks again. Last week, they poured almost US$16 billion into U.S. equity funds, the most in five weeks, EPFR Global data compiled by Bank of America Corp. show.

“The market has mostly looked past the supply chain issues because of how well companies have been navigating this difficult environment so far and because, at least for now, those issues appear to be manageable or non-material over the long term in most cases,” said Chris Zaccarelli, chief investment officer at Independent Advisor Alliance. “We’ve been pleasantly surprised this earnings season - both in terms of percentage of companies beating on the top and bottom line, but more importantly in the mostly positive outlook going forward.”