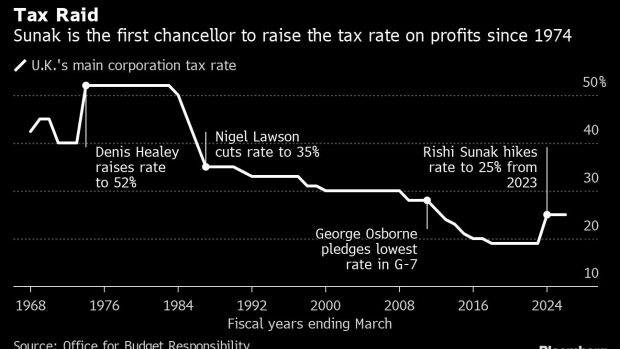 (Bloomberg) -- Chancellor of the Exchequer Rishi Sunak’s plea for businesses to boost investment highlights a key weakness in the UK economy that company executives have long complained about.

Britain has fallen behind other advanced economies in the Group of Seven when it comes to the amount businesses are investing in everything from research and development to improving technology and equipment.

The gap has widened since the vote to leave the European Union and is one of the issues holding back the long-term growth potential of the UK economy. Sunak this week vowed to cut taxes to spur investment. While that won’t do much to address the cost-of-living crisis hitting consumers, it’s an idea embraced by business executives.

“He has a very good point,” John Browne, the former chief executive officer of the oil major BP Plc, said in an interview. “We need to invest more in innovation and more in R&D. Industry is not spending enough. The balance is too much government spending.”

Business investment is crucial because it increases productivity, which also is lagging in the UK. Boosting it would help Prime Minister Boris Johnson deliver on a pledge to lift living standards in poorer parts of the country under his “levelling up” agenda.

The debate comes at a critical juncture both for the government and executives. Many UK companies are sitting on significant cash piles after pausing dividends and capital investment plans at the height of the pandemic.

Many management teams are now choosing to return much of this surplus cash to shareholders, rewarding their patience after a tough two years of intermittent lockdowns amid a global supply chain crisis and surging inflation.

Businesses including Burberry Plc and Compass Plc and most of the large banks have announced significant share buybacks in recent weeks. Oil company BP Plc’s decision to boost its share repurchase program means that FTSE 100 companies are now collectively planning an all-time high of 37 billion pounds of share buybacks this year, according to AJ Bell.

It’s not just the big banks and oil companies returning cash either, according to Adrian Gosden, investment director at GAM.

“I have in my fund some small companies that are also buying back their shares because their shares are valued at maybe half times their asset value. So why not?” Gosden said.

The CBI, Britain’s biggest employers group, has called on Sunak to stimulate investment by cutting taxes in a way that will encourage businesses. The lobby group notes that the allowances tax authorities grant for offsetting capital investments is much less generous than in other countries, especially the US.

“We will need to ensure that there is economic growth in the pipeline to avoid any downturn in our economy that could worsen or prolong the cost-of-living crisis,” CBI Director General Tony Danker said. “It will ensure that any firm pausing on investment now, will be bold, decisive and back their original plans.”

UK investment has suffered a series of blows in recent years. The uncertainty created by Brexit, the pandemic and the cost-of-living crisis means that firms are spending no more than they were seven years ago, and less than at end of 2019 -- just before the pandemic struck. Business investment is around 10% of GDP in the UK, the lowest of any Group of Seven nation.

In 2021, Sunak introduced an incentive that hands firms 25 pence off their tax bills for every £1 they spend on qualifying plant and machinery. The so-called super-deduction was expected to supercharge investment as companies released billions of pounds of cash accumulated during the pandemic to take advantage of the tax break before it expires in 2023.

The Office for Budget Responsibility, the independent body that oversees forecasting for the government, in March predicted a 10.6% surge in investment, making it a key driver of growth this year. The Bank of England had been even more bullish in its assessment a month earlier.

A criticism of the super-deduction is it will merely bring forward investment, only for firms to rein in spending when it no longer available. In fact, companies face a double hit next April. On the day the allowance ends, the tax rate on corporate profits is due to jump by 6 percentage points, part of Sunak’s efforts to bring down government borrowing.

Companies want a permanent replacement, and the Treasury has opened a consultation about how to reform the capital allowance regime to “drive and sustain growth” into the future.

“Simple actions such as expanding the scope of business rate relief to help more companies, such as those in the automotive sector, would enable more businesses to invest and grow,” a spokesman for the carmaker Aston Martin in a written response to questions.

With the economy facing a possible recession, the war in Ukraine disrupting supplies and trade tensions escalating between Britain and the EU, doubts are growing over whether investment will get the boost that had been anticipated.

Earlier this month, the BOE trimmed its forecast for this year and said it saw almost no investment growth in 2023. Meanwhile, the CBI this week said manufacturers had scaled back their plans for investment in plant a machinery and expect to reduce spending on buildings.