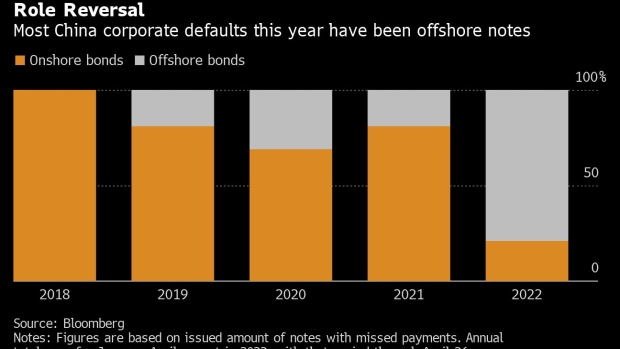 Sunac Real Estate Group Co. sent an initial planned payment to investors via the bond’s trustee, according to at least two noteholders who are not authorized to speak publicly about their holdings. It’s the first principal payment under an 18-month extension agreed to by the note’s holders, according to an April 1 filing. The due date under the plan for a 400 million yuan ($59 million) payment is May 15.

The payment comes a day after Sunac China defaulted on dollar debt, highlighting the growing divergence of the treatment of global investors versus their domestic peers as stress ripples through the real estate sector. The firm, which declined to comment, is China’s fourth-largest developer by sales.

Even as the clampdown on property triggered a wave of defaults among borrowers, holders of domestic notes have been receiving payments or sweetened offers on extension proposals. Most Chinese firms’ payment failures in 2022 have been on offshore notes, a sharp reversal from previous years that’s left overseas creditors with billions in losses and waning power.

The handling of local and dollar debt obligations has raised concerns about how different types of creditors are treated in China’s credit markets as borrowers grapple with liquidity crises. Offshore notes are typically subordinated to their domestic peers and are not secured by onshore assets, leaving global investors with little recourse in the event of a payment failures -- even when the bulk of borrower’s debt is owed to those creditors.

Sunac China has $7.7 billion in outstanding dollar bonds and the equivalent of $3.1 billion in local notes, Bloomberg-compiled data shows. It became one of the country’s biggest property firms to default when the company said it didn’t pay a $29.5 million bond coupon before the end of a grace period. Sunac also warned it wasn’t likely to make payments on other securities, highlighting ongoing liquidity issues amid this year’s sales plunge, and said it hired legal and financial advisers.