Stocks fell after last week’s powerful rally, with investors rebalancing their portfolios in the final days of the quarter.

At the start of a week expected to be marked by fickleness and lack of conviction on a market trough, the S&P 500 had a hard time finding direction throughout most of the day. The tech-heavy Nasdaq 100 underperformed as Treasury yields climbed. The dollar was little changed.

“There will be lots of fund managers rebalancing their portfolios this week, which could mean more volatility,” said Fawad Razaqzada, market analyst at City Index and Forex.com. “Betting on a bear-market bottom could be a costly mistake, while selling short is not as lucrative as was the case when markets were higher.”

Trader sentiment continues to be impacted by a confluence of factors -- from aggressive Federal Reserve hikes to looming recession fears and unsettling inflation readings. For Kristen Bitterly at Citi Global Wealth Management, the market isn’t turning a corner until investors know the US has avoided a recession, “and we are not there yet.”

There’s a growing perception among prominent Wall Street voices that the level of bullishness about the corporate side may be in desperate need of a reality check. Data from Bloomberg Intelligence show analysts expect companies in the S&P 500 to see profits grow by 10.7 per cent, up from 10 per cent a month ago and 8.7 per cent at the start of the year.

Another way of looking at it is: on a scale of 1 to 5 -- in which 5 is a buy and 1 is a sell -- analysts now have an average consensus rating of 4, data compiled by Bloomberg show. That’s the highest reading since 2002. 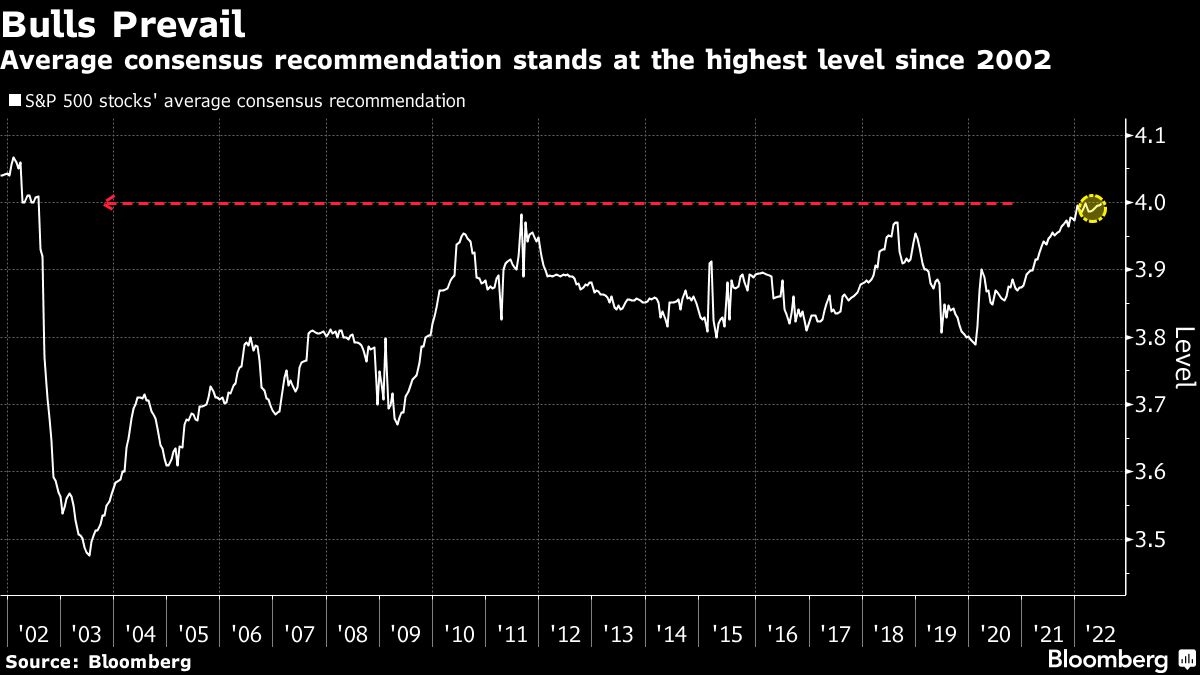 “We are a long way from looking at a situation where investors have sworn against stocks in a significant way like they usually do at the bottom of a bear market,” said Matt Maley, chief market strategist at Miller Tabak. “Investors should use any further gains in the stock market as opportunities to raise some cash and get more defensive.”

Market volatility sparked by fears of recession is also behind the current trend of corporate- and sovereign-bond deals getting withdrawn. Issuers have pulled 16 transactions globally so far this month, the most since Bloomberg started monitoring figures in February, after Russia began its invasion of Ukraine.

What to watch this week: