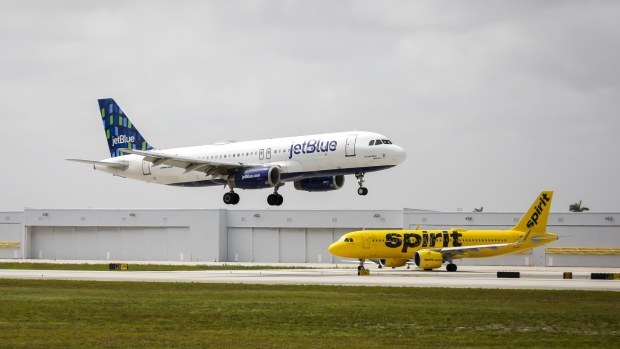 JetBlue and Spirit airplanes at Fort Lauderdale-Hollywood International Airport (FLL) in Fort Lauderdale, Florida, US, on Saturday, May 21, 2022. Spirit Airlines Inc. rebuffed a hostile $3.3 billion takeover offer from JetBlue Airways Corp., setting the stage for a potentially contentious vote by shareholders on whether to back the bid or go with a competing proposal from Frontier Group Holdings Inc. Photographer: Eva Marie Uzcategui/Bloomberg , Bloomberg

(Bloomberg) -- Spirit Airlines Inc. is entering the final days before a critical shareholder vote with a sweetened offer from suitor Frontier Group Holdings Inc. and new support from a proxy adviser to take that deal over a higher bid from JetBlue Airways Corp.

Spirit’s shares tumbled more than 6% Monday as the prospects for the lower of the two proposals improved.

Frontier late on Friday increased the cash portion of its offer to $4.13 a share -- up about $2 from its original bid -- along with 1.9126 of its stock for each Spirit share. Those terms value the offer at about $24.29 a share, based on Friday’s closing price, or about $2.6 billion.

Frontier’s leaders took their message to Spirit shareholders on Monday, saying in an open letter that merger-related synergies will boost the long-term value of their proposal, making it “far superior to what JetBlue offers.”

The revised bid won the backing of Institutional Shareholder Services Inc., which changed course and recommended shareholders vote for that deal when they meet June 30. The proxy adviser said in a report that investors “have clearly benefited from the bidding war between Frontier and JetBlue.” ISS had previously said investors would be better off rejecting the deal but now prefers Frontier because it matches JetBlue’s prepayment plan and protections in case of regulatory failure.

The recommendation comes despite a substantially higher -- and all-cash -- offer from JetBlue. It said last week it’s willing to pay $33.50 a share in a deal valued at $3.7 billion, along with various protections to ensure the transaction gets done. Acquiring Spirit would give JetBlue rapid growth that would make it a stronger competitor to the four-largest US carriers.

“The big deal here is that JetBlue has come in all-cash, they’ve come in with breakage fees, and if you take the Frontier offer, you basically are waiting for synergies for a combined company, a couple years out,” said George Ferguson, a Bloomberg Intelligence analyst. That may make the Frontier proposal less attractive for institutional asset managers, he said.

Frontier is trying to preserve an agreement first struck in February that would create the largest deep-discount airline in the US, with a clear path to pick up Spirit’s most price-sensitive customers and without a bigger rival to hinder expansion. Such discounters charge bare-bones ticket prices and then levy fees for anything extra like bottles of water or paper boarding passes. It would also become the country’s fifth-largest carrier, based on domestic passenger traffic.