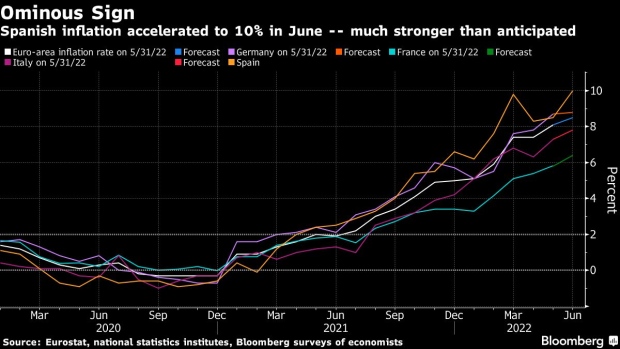 (Bloomberg) -- Spanish inflation unexpectedly surged to a record, defying government efforts to rein it in and signaling intensifying price pressure as the European Central Bank gears up to raise interest rates for the first time in more than a decade.

Propelled by higher food and energy costs, consumer prices jumped 10% from a year ago in June, the INE statistics office said Wednesday. That’s up from 8.5% in May and exceeded all 15 estimates in a Bloomberg survey of economists.

The yield on German two-year debt, which is most sensitive to changes in borrowing costs, pared declines, falling one basis point to 0.95% after earlier sliding as much as 11 basis points.

The surprise reading dashes hopes that inflation in the euro zone’s fourth-biggest economy had peaked, and will embolden ECB policy makers pushing for big increases in interest rates when they kick off next month. While President Christine Lagarde this week reiterated plans for a quarter-point rate hike in July to begin a sustained cycle of increases, other officials have floated the idea of more aggressive action.

Governing Council member Gediminas Simkus said in a Bloomberg interview published earlier Wednesday that a 50 basis-point hike should be an option at next month’s meeting. His colleague Martins Kazaks said rates can be raised “quite quickly,” and that front-loading of hikes is “reasonable.”

The Spanish data could offer a prelude to figures from the continent’s biggest economies, with Germany set to report later Wednesday and France on Thursday. The euro zone itself will release numbers on Friday. Spain’s gauge of underlying prices that strips out volatile items quickened to 5.5% -- the most since 1993.

Amid the price spike, Spanish businesses and households are hurting, while the government has squabbled with INE, whose head will step down after months of criticism his office has consistently overestimated price gains.

Prime Minister Pedro Sanchez has joined efforts to tame inflation, capping the price of natural gas used to generate electricity, though that measure has proved less of a benefit than envisaged.

His government has also announced an extra 9 billion euros ($9.5 billion) in tax breaks and direct aid that Sanchez says will shave 3.5 percentage points off inflation in 2022.